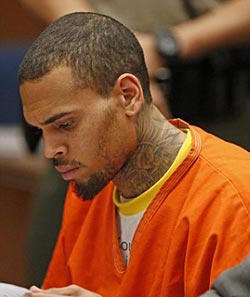 A LOS Angeles judge on Thursday said R&B singer Chris Brown will remain in jail for at least another week as the pop star deals with dual cases on both sides of the country.
Brown, who will now spend his 25th birthday on May 5 behind bars, has been held since March 14 after his dismissal from a rehabilitation centre violated the terms of his court-ordered treatment related to his 2009 assault of his then-girlfriend, the pop singer Rihanna.
Los Angeles County Superior Court Judge James Brandlin said Brown would remain incarcerated unless a resolution on the terms of his probation in the Rihanna case could be agreed to between the prosecutor and Brown’s attorney by a scheduled hearing on May 9.
Brown’s attorney, Mark Geragos, said if he cannot resolve the case with prosecutor, Mary Murray, by next week, he will ask the court to release Brown on certain terms and conditions.
Geragos’ past requests to have Brown placed under house arrest instead of jail have so far been denied.
The “Turn Up the Music,” singer also faces a misdemeanour assault trial in Washington, D.C., after he allegedly punched and broke the nose of a man who was trying to get a picture with him last year.
The Washington trial, which could complicate matters in Brown’s probation case in Los Angeles, has been delayed so his defence could arrange testimony of Brown’s bodyguard, who was convicted last month of misdemeanour assault in the same case.Advertisement