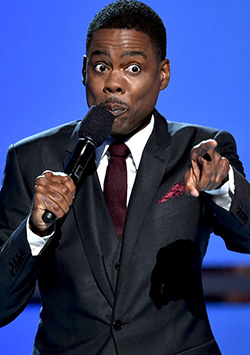 TO SOME, the sad news that comedian Chris Rock and his wife, Malaak Compton-Rock, are to split after almost 20 years will come as a shock. But to those who have followed the star’s comedy career closely, it is not entirely surprising.
For while Rock, 49, has often made confident public pronouncements about the state of his own relationship, he has rarely adopted such a positive attitude in his work.
The couple were married in 1996 and have two daughters. Philanthropist Compton-Rock, 45, founded StyleWorks, a non-profit salon offering free services to working women.
In his 2004 HBO stand-up special, Never Scared, her husband told an audience, “Nothing gets you ready for marriage. Nobody tells you that once you get married, you will never fuck again.”
In the same set, Rock cited Nelson Mandela as proof of the challenges of wedlock. “Mandela spent 27 years in a South African prison,” he said. “Man can do hard labour in 100-degree South African heat for 27 years with no problem. He got out of jail after 27 years of torture, spent six months with his wife and said, ‘I can’t take this shit no more!’”
Also in 2004, Rock, in an NBC News interview, compared his life to another celebrity. “If Bin Laden was here right now, he’s going, ‘Oh, yeah, my eight wives are killing me, too,’” Rock said, adding: “Marriage is beautiful, but if you think you’re going to hold onto your individual self, you’re an idiot.”
The comic has also tackled marriage on the big screen, including in his latest film Top Five, in which he plays a comedian having doubts about his impending nuptials.
In 2007, he co-wrote, directed and starred in I Think I Love My Wife, in which his character considers an affair. “I’ve been married close to seven years,” he reflects in the trailer. “My wife is beautiful, intelligent and a great mother. There’s just one problem: we’re bored out of our minds.”
But at the premiere, Rock extolled marriage’s virtues, telling a reporter, “The best part is just having a partner. There is no real worst part. I’m a comedian – comedians like to work alone. So maybe I’m not the ideal guy to be married to.”
In his 2008 concert film Kill The Messenger, Rock said: “The most romantic words a man will ever say to you are these: ‘I ain’t going nowhere,’ When a man says ‘I ain’t going nowhere,’ what he’s trying to tell you is: ‘I’ve actually thought about going somewhere. I talked to a lawyer. I looked at a place. And I realised I’m going to go through the same shit with the next girl, so why not just stay here and be miserable with you?’”Advertisement