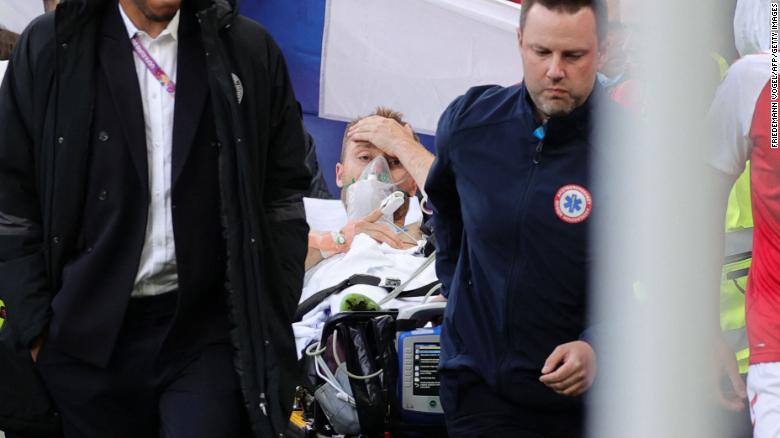 Christian Eriksen is stretchered off after collapsing on the pitch during the match between Denmark and Finland.
Spread This News

Denmark star Christian Eriksen was reported to be in a stable condition after collapsing during the first half of Denmark’s opening Euro 2020 match against Finland in Copenhagen.

The match was suspended following prolonged efforts from the medical staff to resuscitate Eriksen with CPR and a defibrillator after he fell to the ground during a throw-in, shortly before the end of the first half.

“Following the medical emergency involving Denmark’s player Christian Eriksen, a crisis meeting has taken place with both teams and match officials and further information will be communicated at 19:45 CET,” European football’s ruling body UEFA said in a statement on Twitter.

“The player has been transferred to the hospital and has been stabilised.”

Eriksen’s Danish teammates formed a wall around him to protect the Inter Milan star from view as he was receiving treatment. Players from both teams, as well as fans in the stadium, were visibly distressed as Eriksen was being attended to by medics.

“The UEFA EURO 2020 match in Copenhagen has been suspended due to a medical emergency,” UEFA said in an earlier tweet.

Eriksen was eventually stretchered off the pitch after several minutes, being protected from view by the medics holding up blankets.

Journalist Mattias Karen reported that the Finnish fans inside the stadium began chanting “Christian,” to which all the Danish fans responded “Eriksen.”

The 29-year-old midfielder currently plays club football for Inter Milan, moving to the Serie A side in 2020 after seven years with Tottenham Hotspur in the English Premier League.

The Danish talisman, who has more than 100 caps for his country, came through the youth ranks at Ajax and started his professional career with the Dutch club.

Saturday’s incident was reminiscent of Fabrice Muamba’s collapse in 2012, after the footballer suffered a cardiac arrest during Bolton’s FA Cup match in 2012. Muamba eventually recovered but had to cut his playing career short.