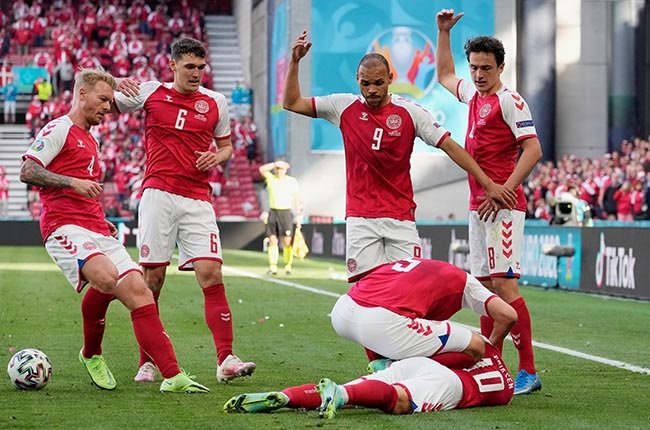 Earlier, officials said the midfielder was stable in hospital and had sent his greetings to his national team-mates.

“He was gone. We did cardiac resuscitation, it was a cardiac arrest,” said Boesen.

“How close were we to losing him? I don’t know, but we got him back after one defib [defibrillation] so that’s quite fast.

“The examinations that have been done so far look fine. We don’t have an explanation to why it happened.”

The 29-year-old Inter Milan player had emergency medical treatment on the pitch before being taken to hospital.

“His condition is stable and he continues to be hospitalised for further examination,” said a statement from Danish officials on Sunday morning.

“This morning we have spoken to Christian, who has sent his greetings to his team-mates.

“The team and staff of the national team has received crisis assistance and will continue to be there for each other after yesterday’s incident.

“We would like to thank everyone for their heartfelt greetings.”

Saturday’s incident happened as a throw-in was played towards Eriksen near the end of the first half.

His distressed team-mates surrounded him and the shocked supporters at Parken Stadium were visibly upset as the player was treated.

Boesen said Eriksen was unconscious when he reached the player on the pitch.

“When I got to him he was on his side, he was breathing, I could feel a pulse, but suddenly that changed and we started to give him CPR,” he said.

“The help came really fast from the medical team and the rest of the staff with their co-operation, and we did what we had to do and managed to get Christian back.”

Head coach Kasper Hjulmand said Eriksen told him he did not remember much from Saturday’s collapse.

He quoted the midfielder as saying: “I think you are feeling worse than I am. I feel as if I’m about to go training now, boys.”

Hjulmand added: “Christian is in good spirits and it’s a huge relief for the players after all this uncertainty. There is no doubt that we have been on the ropes.”

Only once informed that Eriksen was awake in hospital did the players agree to resume the match, with Finland going on to win 1-0.

Hjulmand told reporters after the game: “It was a traumatic experience. We talked about those feelings and it would’ve been OK to say ‘no’ if they didn’t want to play.

“Some of them were not able to play, some were ready. It’s not normal to play such a game when one of your friends is suffering with a heart issue.”

Fans who were at the game later gathered outside Rigshospitalet in Copenhagen to show support for the player, while many across the football world sent their best wishes – among them, England captain and Eriksen’s former Tottenham Hotspur team-mate Harry Kane.

Fellow Spurs player Son Heung-min also sent a message of support to his former team-mate after scoring the goal that guaranteed South Korea top spot in their qualifying group for the 2022 World Cup.

Son scored from the penalty spot against Lebanon before running to a pitchside camera and holding up his fingers to signal 23, the shirt number the Dane wore during his time at Spurs.

“Christian Eriksen, I love you,” Son said as he looked into the camera.

Downing Street said British Prime Minister Boris Johnson was “shocked” by what happened to Eriksen, and his thoughts were with the Danish player and his family.

Last month, Eriksen helped Inter clinch their first Italian title for 11 years in his first full season with the club, after joining from Spurs for £16.9m in January 2020.