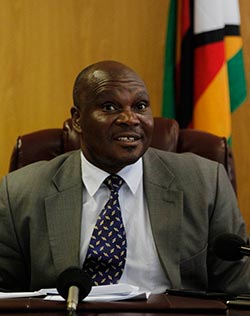 THE chrome sector is seriously considering importing power dedicated for its smelters as local tariffs are being charged at a premium, stifling the viability of the sector, mines minister Walter Chidhakwa has said.
The government banned raw chrome exports a few years ago as it sought to promote value addition and beneficiation of the mineral in a move that hit on the viability of players in the sector resulting in the closure of some firms.
Currently three smelters, among them Zimasco and Afrochine, are in operation with five including MonaChrome, Zim Alloysand Wel Mine having closed shop due to viability constraints.
Those that remained operational are however battling to remain afloat due to high power tariffs.
The industry has said it needs about $85 million to boost production to the all-time high of over 500,000 tonnes in the next four years.
Chidhakwa said importing power was one major alternative for the sector while negotiations with the Zimbabwe Electricity and Distribution Company (ZETDC) for a price reduction were ongoing.
“The cost of power is key to the successful implementation of our chrome programme and the mining sector in general,” Chidhakwa told Parliament on Wednesday.
“We are looking at the possibility of importing power specifically for ferrochrome smelters, that way, we might be able to get cheaper power.”
Local power supplies were not only expensive but unreliable as the power utility is struggling to meet demand for both industry and households.
Chidhakwa said ZETDC was looking at how it can lower tariffs for the sector while at the same time remaining viable.
In the meantime, the mines minister said he was meeting with the remaining chrome smelters to discuss pricing issues after they were accused by small scale miners of deliberately lowering prices taking advantage of their desperation for a market.
“I have met with Zimasco about the issue and am to meet with Afrochine and Maranatha,” he said, without disclosing the prices that the miners were being paid.Advertisement