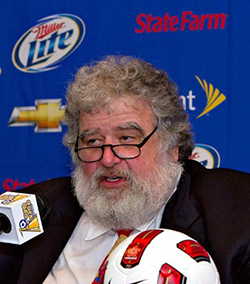 CHUCK Blazer, for two decades the face of North American soccer, is the multimillionaire felon who pleaded guilty to racketeering and blew the whistle on endemic corruption in the sport’s governing body.
Facing a possible 20 years in jail, it is a stunning fall from grace for the cancer-stricken 70-year-old who once consorted on the world stage with the likes of Nelson Mandela and Vladimir Putin.
From 1990 to 2011 he was general secretary of CONCACAF, overseeing their entire operations from New York, and from 1997 to 2013 he was the only US representative on FIFA’s executive committee.
As the powerbroker of US soccer he travelled by private jet, kept two multi-million-dollar apartments in New York — one reportedly for his cats — a home in the Bahamas and celebrity friends.
But behind his back, he was known as “Mr Ten Percent,” a nod to the multimillion-dollar kickbacks on which he allegedly insisted.
Wheelchair bound at a closed-doors court hearing in November 2013, Blazer pleaded guilty to a US federal judge on 10 charges including fraud, racketeering, money laundering and tax evasion.
He is one of four people to plead guilty. Fourteen other FIFA officials and sports marketing executives have been indicted.
Just months earlier, Blazer was suspended in disgrace, relinquishing his enviable lifestyle for an uncertain fate after posting $10 million bail.
In testimony partially unsealed Wednesday, he admitted to conspiring with fellow FIFA executives to accept bribes during the process to choose hosts for the 1998 and 2010 World Cups.
“Among other things, I agreed with other persons in or around 1992 to facilitate the acceptance of a bribe in conjunction with the selection of the host nation for the 1998 World Cup,” Blazer said.
He went on to accept that he and “others on the FIFA executive committee” agreed to accept bribes in conjunction with the selection of South Africa to host the World Cup in 2010.
Key chain bug at London Olympics
Blazer was allegedly promised $1 million of the bribe, but never received the full amount — collecting only $750,000 from former FIFA vice president Jack Warner from 2008 to 2011, court papers say.
Heavily bearded and significantly overweight, Blazer told the judge he was being treated for rectal cancer, and had diabetes and coronary artery disease. He forfeited more than $1.9 million.Advertisement

He must fork out a second amount when he is sentenced.
The BuzzFeed News website reported that he raked in more than $21 million from football, much of it paid to offshore shell companies.
Not content to go down alone, it was his readiness to betray old friends at FIFA that has brought the world’s most popular sport to its knees and forced the resignation of Sepp Blatter.
His testimony is a key plank in the sweeping US investigation that reportedly goes as high up as FIFA president Blatter.
And it was avarice that got him there in the first place.
Federal agents reportedly turned him into a cooperating witness in 2011, after discovering he had failed to pay income tax for more than a decade despite his multi-million-dollar income.
Blazer wore a key chain that contained a tiny bug to record leading figures in conversation at the London Olympics, allegedly key to the FIFA investigation, the New York Daily News reported.
A larger-than-life character, the pugnacious Blazer divided opinion in the United States and in the corridors of power at FIFA.
What is clear is that the former soccer dad from New York had a gift for making friends, and influencing people.
Despite never playing the game, he has been credited with helping to turn American soccer into a powerhouse, promoting the national team and winning Major League Soccer it’s first real TV contract.
It was Blazer — with his nose for business and exuding charm — who was credited with turning FIFA into the money-making machine that it is today.