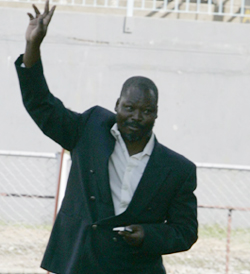 FORMER Dynamos midfielder and one of Zimbabwe’s celebrated footballers, Moses Bambo Razorman Chunga, says he is itching to coach Highlanders football club, a move which, if successful, would be unprecedented.
In an interview with Television Sport Media, the former Warriors captain said the myth that only a former Highlanders player should coach Bosso does not hold water in these days of modern football.
“I would one day love to coach Highlanders because I see a lot of potential (in the team) which is not being tapped well. We have to get away from this thinking along regional lines and try to impart knowledge to every Zimbabwean,” said Chunga.
Bambo, who also played for Eendracht Aalst in Belgium during his hey days, said he spent part of his childhood in Bulawayo’s Cement Siding and coaching Highlanders would be like working for any other club.
“I used to stay at Cement Siding. This is where I spent part of my childhood; we used to play soccer with other young boys,” said Bambo.
Although Dynamos and Highlanders have exchanged players before, no former Dembare player has ever coached Highlanders or vice versa.
If Chunga’s dream comes true, he will be the first ever coach to break that divide.
When reached for comment over Chunga’s aspirations, Highlanders chairman, Modern Ngwenya referred New Zimbabwe to club’s chief executive officer Nhlanhla Dube.
“On that one please talkto my CEO,” said Ngwenya.
Dube’s mobile was not reachable.
Advertisement