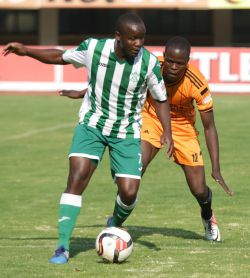 CAPS United…. (2) 3
Ngezi Platinum………0
DOMINIC Chungwa was the hero after scoring a memorable brace as Caps United hammered Ngezi Platinum 3-0 in a Castle Lager Premiership tie at Rufaro on Sunday.
John Zuwawo, a product of their junior policy, scored the other goal. Chungwa who has been struggling in front of goal also scored in the previous match against FC Platinum.
After a slow start to the campaign in which their defensive frailties were exposed with lowly teams like Yadah FC also feasting on them after emerging 2-0 winners, it looked like the champions would plunge into an irretrievable nose dive.
They were so poor, their defence leaked like a sieve which earned them the unwanted reputation of the “Four Brothers” tag as they conceded four goals in most of their games in their African Champions League adventure.
But they are now playing with freedom and appear to be enjoying the game once again and after managing a clean sheet against one of the high scoring teams in the league, there is reason for Caps United supporters to believe.
Backed by a vociferous crowd that included club president Farai Jere, the Harare giants showed the determination of a bee and the spirit of an ant as they raided their opponents’ goal time and again.
Ngezi Platinum had started off brightly, with Terrence Dzukamanja, and Walter Mukanga coming close on the quarter hour. But the outstanding Justice Jangano, playing in place of Stephen Makatuka who fell sick, in the build-up to the match, was uncompromising and with a little bit of luck could have registered his name on the score sheet on 24 minutes but missed a headed opportunity.
However, six minutes later, Caps United were 1-0 up, Chungwa getting to the end of a cut in from the left by Phineas Bhamusi to nod home.
Two minutes later, Zhuwawo popped up with the second- a blistering low shot that gave goalkeeper Pedzisai Chadya no chance at all.
As the home team bombarded Ngezi goal area with an assortment of shots, Hardlife Zvirekwi came close with a speculative shot on 33 minutes.
Ngezi coach Tonderai Ndiraya brought in Donald Teguru for Edgar Tapera on 40 minutes hoping to claw back into the game. But it was Caps United instead who scored with Chungwa completing his brace on 60 minutes, leaping highest to plant a firm header into the nets with Ngezi back line guilty of ball watching.Advertisement

But Caps United finished the match without big goalkeeper Edmore Sibanda, who was stretchered off after picking an injury on 52 minutes. He was replaced by Jorum Muchambo.
Caps United assistant coach Fungai “Tostao” Kwashi was pleased with the victory. His counterpart Tonderai Ndiraya admitted Caps United were the better side.