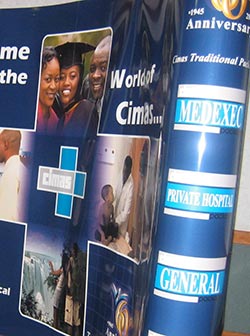 REVENUES at the Commercial and Industrial Medical Aid Society (CIMAS) for the year to December 2013 surpassed the US$100 million mark, management revealed recently.
Overall earnings reached US$110,4 million, an increase of 12,7 percent over the 2012 figure of US$98 million.
The society, the country’s oldest and largest medical aid company, achieved a surplus of US$5,5 million, an increase of 25 percent over the 2012 surplus of $4,4 million. More than half of the surplus was attributed to non-medical aid activities.
“It is encouraging to note that 62 percent (64 percent in 2012) of this year’s surplus came from non-medical aid activities and, while it declined, this strong performance confirms the sustainability of our non-medical aid activities,” group chairman Mordecai Mahlangu said in a statement accompanying the financial results.
Mahlangu said the society had experienced another year of robust performance despite the challenging economic and social environment.
The results, he said, demonstrated strong operational capacity, prudent fund management and a commitment to deliver accessible, affordable and sustainable quality healthcare solutions.
Medical aid fund membership grew by six percent while attendances at Cimas healthcare facilities grew by eight percent.
This, Mahlangu said, was achieved in an environment where most competitors were shrinking. Attendances at Cimas medical services outlets, however, declined.
The society’s claims reserves (liquidity reserves) as at 31 December 2013 were 8,1 weeks, up from 5,6 weeks in 2012.
This was, however, still short of the prudential limit of 12 weeks.
Mahlangu said the surpluses that the society was generating were, however, assisting in addressing this gap. He said the Group had set itself the target of reaching the desired level of reserves within the next three years.
The society was fully compliant with the regulatory capital requirements of 25 percent of revenue. Its total reserves as at 31 December 2013 were US$27,2 million. In 2012 they were at US$20,9 million.
Despite the Group’s robust performance, Mahlangu said the economic and social environment in Zimbabwe remained challenging and needed to be addressed.
“The economy is facing moderate to sluggish growth prospects. Liquidity challenges are unlikely to ease any time soon and this situation is exacerbated by a fragile and under‑capitalised banking sector.Advertisement

“The economy is also facing low productivity and increasing wages, and these are serious impediments to investment and growth,” he said.
Immediate priorities, he said, were creation of fiscal space, formulation and application of enabling industrial policies, addressing infrastructure and key sector specific challenges, promotion of foreign direct investment and seeking a solution to the debt arrears problem.
He however, said Cimas would continue to provide members and customers with excellent service.
“The Society continues to build a strong healthcare solution delivery capacity. We have increased our revenues by defending our position in mature markets and diversifying into target healthcare solutions niches.
“We will continue to focus on providing our members and customers with excellent value and to balance the needs of all healthcare stakeholders in a responsible manner.
“We believe that we are on course to fulfilling our vision of being champions in delivery of healthcare solutions. Members can expect some exciting developments in the future as we continue to seek strategic opportunities in the healthcare sector,” he said.