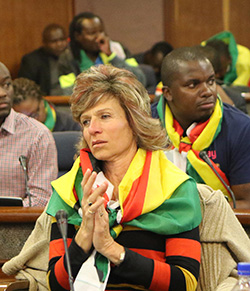 RESERVE Bank of Zimbabwe (RBZ) Governor John Mangudya was last Thursday grilled by members of the public over the government’s decision to print and introduce bond notes later this year.
The notes will be introduced in October to, government hopes, end cash shortages which have seen Zimbabweans spending hours in bank queues with limits imposed on daily withdrawals.
The discussion was organised by #THISFLAG pastor Evan Mawarire.
Leader of His Generation Church, Mawarire’s social media campaign highlighting the country’s economic problems has gone viral, attracting support from Zimbabweans across the world.
Most of the speakers who contributed to Thursday’s discussion pointed out fiscal indiscipline by the government as the main cause of the country’s economic problems.
Harare attorney, Advocate Fadzai Mahere, said Mangudya’s conduct regarding the proposed bond notes was unconstitutional and gross misconduct.
She said the government was enforcing the measures without proper consultations, warning this would cause the already battered economy more problems in the future.