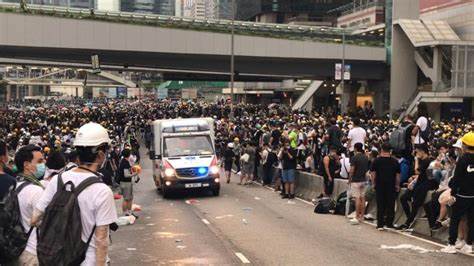 Protests over a controversial new law on migrants are raging across several Indian cities, prompting police to clash with demonstrators.

The new law entitles non-Muslim migrants from three Muslim-majority countries to citizenship if they are facing religious persecution.

Police used tear gas and detained protesters in the capital Delhi as buses were torched and roads blocked.
Protests have raged across northern and eastern India since the law was passed.

Internet services have been shut down in several cities where protests are taking place. Universities across the country have resumed demonstrations on Monday.

A massive demonstration against the law has also begun in West Bengal state, led by Chief Minister Mamata Banerjee and her ruling Trinamool Congress party.

Tens of thousands of people are expected to participate.

Some critics say the law is anti-Muslim, while others – especially in border regions – fear large-scale migration.
Six people have been killed in the five days of unrest.

Several lawyers asked the Supreme Court to intervene, pointing out that officers had assaulted students in bathrooms, but the chief justice said that the court would not take any action until students ceased their protests.

The UK, US and Canada have issued travel warnings for people visiting India’s north-east, telling their citizens to “exercise caution” if travelling to the region.