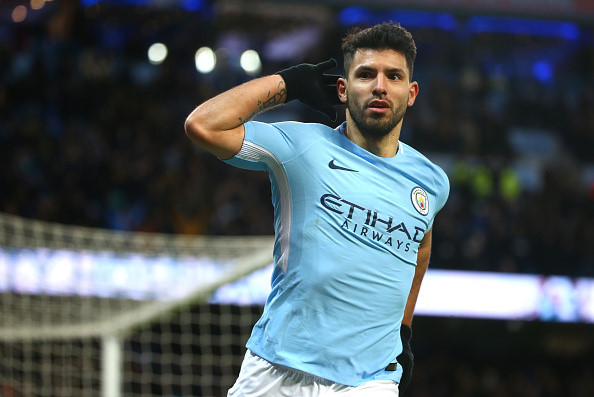 Sergio Aguero was man of the match
Spread This News

MANCHESTER City cruised back to the top of the Premier League as they condemned strugglers Fulham to their eighth consecutive defeat.

City, who had 10 shots in the first 15 minutes, added their second when Sergio Aguero sublimely lifted the ball over home goalkeeper Sergio Rico from close range.

Some woeful defending from Fulham – who have now conceded 72 goals, the worst record in the top flight – contributed to both goals, with Timothy Fosu-Mensah and Joe Bryan both guilty of gifting the ball to City near their own goal.

Scott Parker’s side also struggled to make an impression at the other end of the pitch and failed to register a shot on target.

City, who are chasing an unprecedented quadruple, move one point above Liverpool, who host Tottenham on Sunday (16:30 BST kick-off).

By the time Aguero was substituted in the 57th minute Manchester City were well on their way to a seventh consecutive Premier League victory.

And the 30-year-old, who is the division’s top scorer with 19 goals, played as decisive role as usual in the final third.

He may have only managed 22 touches, but one of his first was seizing on to Fosu-Mensah’s mistake to assist Silva’s opening goal.

Silva then repaid the favour to provide the Argentina forward the chance to continue his own rich vein of form – and Aguero delivered his 14th goal in his past 14 appearances.

His darting run gave him the time to execute the deftest of finishes as Rico closed in to narrow an already tight angle. It was Aguero’s only shot on target but it brought him his fifth goal in eight Premier League starts against Fulham.

It also underlined his prowess against sides that come up from the Championship.

Since his arrival in England from Atletico Madrid in 2011, no player has been involved in more Premier League goals against newly promoted teams than Aguero – who has scored 29 times and provided seven assists.

With injury depriving the Cottagers of 10-goal top scorer Aleksandar Mitrovic, they started the contest with a line-up that had seven league goals between them this season.

In contrast, the visitors – who are now 14 games away from the quadruple – were able to boast a combined 22 league goals among their substitutes.

The opening half emphasised the disparity of resource and the ambitions of the two clubs, as the best attack in the division repeatedly cut open the worst defence.

Fulham were fortunate to only be two behind at the interval as City created a succession of chances and Raheem Sterling appeared to have a valid claim for a penalty turned down after Fosu-Mensah’s challenge.

And even when City eased up in the second period, the hosts were still unable to muster an effort on target.

Instead, City almost added a third goal when Kyle Walker fired a right-foot shot against the post after Sterling had laid the ball into his path.