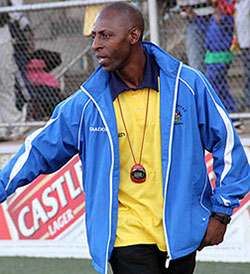 HARARE City coach Bigboy Mawiwi feels their Mbada Diamonds Cup exit is a blessing in disguise that will allow them to fully concentrate on the league race.
The capital city club were eliminated by Highlanders in the semifinals of the cash-rich tournament on Saturday on penalties following a two-all regulation time stalemate.
Mawiwi has refocused on the league title where his side is on tie on 49 points with leaders Dynamos but slightly edged by goal difference.
“We really wanted to win the Mbada Cup or at least get into the final, but it was not to be,” Mawiwi said.
“I have told the players that we should not cry much because you never know what awaits us in front. We still have the league title to play for and now we have much time to concentrate on it.
“We will put all our energy on the league title and try to make sure we end the season with something to show for all the hard work we put in all season. What we just have to do now is focus on the remaining games. We are not ruling ourselves out as yet.”
City face relegated Motor Action on Wednesday in what looks like an easy match on paper.