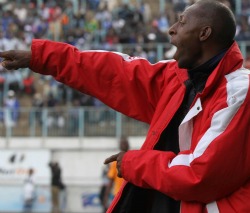 HARARE City coach Bigboy Mawiwi has said hidden hands behind the scenes are contributing to the team’s poor league run.
City succumbed to their fifth successive loss of the season on Wednesday after falling down 1-0 at home to Buffaloes at Rufaro Stadium.
Mawiwi was again left looking for answers after the morale-sapping defeat and said off-field forces are adding to their woes.
“This is about some issues outside the pitch. At the moment I cannot divulge what exactly is happening but some things are happening off the field. You can see the players are showing hunger to win and giving it their all but we are failing to win,” Mawiwi said.
Mawiwi’s comments follows reports of growing discord between the technical team and club executive.
City visit FC Platinum on Saturday in what will undoubtedly be another tough assignment for them that pose a real threat to Mawiwi’s job.
FC Platinum coach Lloyd Mutasa is also under pressure after managing just one win so far but Mawiwi is determined to record their first victory of the season.
“We have now set our sights on the FC Platinum game. It is a must-win for us and we will continue doing our best. Yes the pressure is there but it is not something that we should let worry us,” he said.
The FC Platinum and City clash is touted to be a match that will see the first head coach causality of the season.
FIXTURES
Saturday: Bantu Rovers v Chiredzi (Luveve 1300), How Mine v Hwange (Luveve 1500), FC Platinum v Harare City (Mandava 1500)
Sunday: Triangle v ZPC Kariba (Chishamiso 1500), Chapungu v Shabanie Mine (Ascot 1500), Black Rhinos v Chicken Inn (Rimuka 1500), Dynamos v Buffaloes (Rufaro 1500), Highlanders v Caps United (Barbourfields 1500)