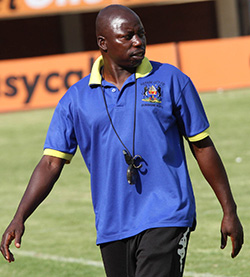 IN A bid to attract a full house, the Castle Lager Premier Soccer League has reduced gate charges for Sunday’s Chibuku Super Cup final between FC Platinum and Harare City at Mandava Stadium in Zvishavane to $1 for the rest of the ground.
Those wishing to sit in the grand stands will part with $3 – a figure normally charged for the rest of the ground for local matches.
Mandava can take in 20,000 fans and the PSL, probably basing their decision on Harare City’s low profile, are keen to have as many fans as possible.
The last final staged in Harare was on October 5 between Dynamos and lowly Triangle in the One Wallet Cup which attracted close to 12,000 fans, although the official sitting capacity of the National Sports Stadium is 60,000.
Sunday’s final is sponsored by Delta Beverages through their new and improved popular Chibuku sorghum beer brand. Winners will take home $75,000 with the losing finalists getting $50,000.
The final brings Harare City coach Masimba Dinyero back to Mandava where he was assistant coach until early May when he was sacked by then boss Lloyd Mutasa for allegedly leaking team information ahead of the Independence Trophy final against Dynamos.
But Dinyero, who had been tipped for the assistant coach’s position at Dynamos, says he is not bitter and will not be seeking revenge.
“I am not bitter at all and l am not on a revenge mission. In fact football should bring people together. I am a professional and my sole aim is to ensure that Harare City get a piece of silverware this season,” he said.
Dinyero will miss Martin Vengesayi due to injury but will have all his star players Francesco Zekumbawira, David Kutyauripo, Nathan Ziwini and Osborne Mukuradare and former FC Platinum player William Manondo available.
Platinum, who have already bagged the CG Msipa Charity Shield, Independence Trophy and the ZNA Charity Shield, will be looking to put the icing on the cake on a season that only gained momentum with the sacking of Mutasa.
New coach Norman Mapeza has rejuvenated the same players that Mutasa failed with, taking them from seventh spot where they had 31 points to fourth position with 48 points ahead of their last home game of the season against Chiredzi.
And, who knows, they might end up in third place with 51 points should Caps United lose to current leaders ZPC Kariba.
However, missing from their line up for Sunday is Aaron Katebe, who is in Mozambique with the Zambia national team for the Africa Cup of Nations 2015 qualifier.Advertisement