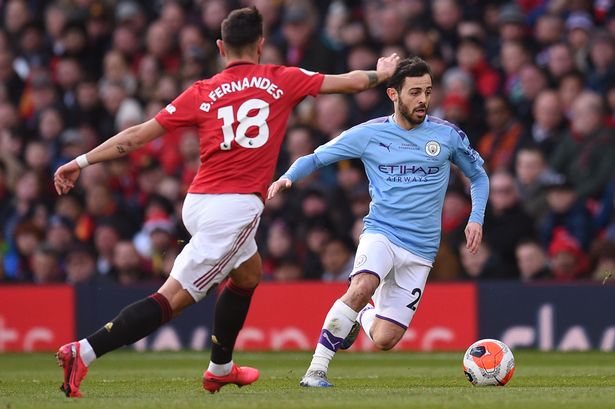 ENGLAND: Kevin De Bruyne and Riyad Mahrez scored twice as Manchester City reopened a six-point lead at the top of the Premier League by brushing aside Manchester United 4-1 at the Etihad on Sunday.

Defeat means there is now a 22-point gap between the clubs and is another blow to United’s chances of just qualifying for the Champions League next season.

The Red Devils now trail Arsenal by a point in fourth, who also have three games in hand.

At the top of the table, Liverpool also have a game in hand to reduce City’s advantage to three points.

But Pep Guardiola’s men responded to the pressure applied by the Reds’ seven-game winning run in the league by bouncing back from two sup-par performances against Tottenham and Everton.

Just as in their meeting at Old Trafford earlier in the season, there was a gulf in class between the sides as City secured just a second league double over their local rivals since an Abu Dhabi takeover in 2008 swung the balance of power in Manchester.

United were without the injured Cristiano Ronaldo and Edinson Cavani in attack, but it was defenders Raphael Varane and Luke Shaw, missing due to positive cases of coronavirus, whose presence was most keenly missed.

Despite their dominance over United when it comes to finishing higher in the table in recent years, City had only won one of the last seven derbies at the Etihad.

United have consistently had joy on the counter-attack in that run and the pace of Jadon Sancho and Anthony Elanga caused problems once more.

Sancho left City as a 17-year-old to make his name at Borussia Dortmund after growing tired of waiting for a pathway into the first team.

The England international took time to find his feet at United after returning to the Premier League for huge £73-million fee.

But Sancho has been one of the few successes of Ralf Rangnick’s interim spell in charge and produced a stunning finish into the far corner on 22 minutes.

United captain Harry Maguire had to cope with more reports this week of members of his own team questioning whether he is of the required standard to lead the team.

More criticism is sure to come Maguire’s way as he was wrong-footed twice for City’s second.

Phil Foden looped the ball over his England teammate and when he was denied by a brilliant save from David de Gea, the loose ball finally found its way to De Bruyne to smash home.

Rangnick’s men then had to sustain a period of pressure just to get to half-time still in the game.

The one way traffic continued after the break and only another day this season when De Gea was United’s best performer prevented an even more embarrassing rout.

The Spaniard held onto De Bruyne’s fierce free-kick before Mahrez blazed over from the edge of the area.

But United did not learn their lesson as the Algerian was left unmarked at the edge of the box when he was picked out by De Bruyne’s corner and connected sweetly to find the far corner.

De Gea was forced into further saves from Mahrez and Joao Cancelo.

But even he could not stop Mahrez’s powerful effort to rub salt into United wounds in stoppage time after VAR ruled the City winger was not offside.