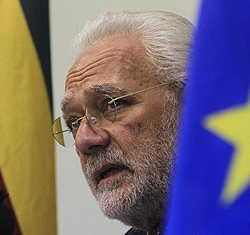 DURING the recent 4th EU-Africa Summit which brought together more than 60 EU and African leaders, and a total of 90 delegations, to discuss the future of EU-Africa relations and reinforce links between the two continents, the leaders underlined the importance of the two continents’ shared values of democracy, respect for human rights, the rule of law and good governance as well as the right to development.
The Declaration from the Summit presents the latest benchmark for assessing EU-Africa relations. It would therefore be appropriate to assess the EU’s current policy shift on Zimbabwe against the commitments and aspirations spelt out in the joint declaration. The purpose of this article is not to exhaustively go through every article in the declaration but simply to initiate a discussion on the issue. The discussion is necessary to counter the growing tide of realpolitik which is currently charactering the EU-Zimbabwe relations.
Before the EU-Africa Summit, in our analysis [i]  which appeared in the EU Online Journal on pages 78-79, we warned that at this consequential historical juncture, it is not the time for Europe to navel-gaze, baulk under the pressure of African political elite or nourish old habits that reinforce the status quo. Rather, it is the time to shake off complacency and recognize that Africa’s crisis of governance is being driven by a few individuals who remain committed to maintaining power and wealth at the expense of their people, thus collectively degrading Africa’s future. It is time to chart a course towards a more secure and sustainable partnership that recognizes that human rights and democratic values are an essential golden thread in the narrative of development.
The developments in Zimbabwe reveal that the EU did not heed the above views and neither is its policy shift in line with the numerous commitments made in the declaration. It amounts to repudiation of a contract, which has not yet been signed. In his recent comments, of 3 July 2014 the EU Ambassador to Zimbabwe is reported to have said that there is no leadership crisis in Zimbabwe, ‘If we had a leadership crisis there would be chaos. We still have a leader who manages to keep at bay under control these forces that are very much contradictory.’ The ambassador also accused civil society of being ‘anchored in the past,’ saying: “The civil society has a role to play but I have the impression that you are a little bit anchored to the past where instead of seeing NGOs one perceives AGOs, Anti-Government Organisations.”Advertisement

On 27th June, Ibbo Mandaza, leader of a well-respected think tank in Zimbabwe, SAPES Trust, made related remarks of 27 June in South Africa, where he is reported to have said, ‘Zimbabweans must help rebuild their country under Zanu PF, and ensure the country re-entered the international community so it could also raise foreign loans to rebuild the economy’. These remarks came in the footsteps of the Democracy Promotion Conference jointly held between SAPES Trust and the U.S-based National Endowment for Democracy in May 2014. All these statements are simply a few waves that are symptomatic of a deep wave of realpolitik that has ferociously hit the Zimbabwean political shores. Unfortunately some within both the international and local civil society groups are abating this wave.
What is ironic is that during the same week the above remarks were made, President Robert Mugabe whom the EU considers a good leader, is reported to have vowed that whites would never be allowed to own land in Zimbabwe, saying the few remaining white farmers must go. At the same time, Zanu PF legislator, Tionei Melody Dziva, who represents the Midlands province under the women’s quota, torched a storm of controversy after rubbishing claims of high unemployment in the country. She is quoted to have said, “If there was poverty in this country we would be seeing dead bodies all over,’’ If one adds up the EU and Zanu PF positions, they could summed as, ‘There is no leadership and economic crises issues in Zimbabwe’.
Yet the current economic demise, which some say has reduced almost every Zimbabwean to a street vendor, and the discriminatory nature of the president’s words, are clearly an indication of a nation in both economic and leadership crisis. Given the recent history of killings of the few remaining white farmers on isolated farmers in Zimbabwe, the President’s words should send worrying signals to anyone who cares about the country. While analysts have focused on the economic consequences of such utterances, what is even more worrying is the human rights dimension, in particular racism on the basis of ethnicity and how such words could be misinterpreted by ethnic conflict entrepreneurs in the country to ferment hatred and even murders against one race.
Espen Barth Eide in his article ‘Conflict Entrepreneurship’ defined these conflict entrepreneurs as “actors who use a specific situation or condition for the purpose of establishing a conflict in order to gain something through the exploitation of new power relationships. The gain can be personal (economic wealth, political power) or it can be seen by the conflict entrepreneur to benefit a collective with which he identifies. Instigating a conflict can even be seen as a prerequisite for preserving and protecting that collective against (perceived or real) external threats.”
As all this is happening, it is not time for civil society to cower, retreat or compromise its values and commitment to upholding human rights. They must continue speaking truth unto power to curb the current trends that have denied a generation of opportunities and similarly degraded our common future. It is time for civil society, seized with the EU-Africa Summit Declaration, to speak truth unto the European powers both in Brussels and Harare, enumerating instances where the government is not complying with the commitments made therein, as well as under other articles of cooperation and international law.
While it is civil society’s role to work with the government to build durable and sustainable institutions, that role is underpinned by its primary role to hold the government to account.  This enables them to speak truth unto power without being compromised in the process. According to civil society contact group study in 2006, CSOs must fit within the definition of civil society, which is defined by four main characteristics:

They are established voluntarily by citizens seeking to promote their concerns, values or identities;
They are organised around the promotion of an issue or the interests of a particular section of society;
They are autonomous from the state, which is essential if they are to provide credible contributions from their numerous and diverse constituencies;
Finally, they do not aim at optimising profits.”

Failure to speak out and the resultant resentment is often the cause of conflict. According to Jeffrey Smith of the Robert, F Kennedy Centre, crises do not merely erupt overnight. Usually they are the result of years of repression, of the denial of basic human rights, and the targeting of those who dare raise their voices to criticize those in power.
The current EU policy shift based on realpolitik does not adequately appreciate the inherent link between respect for basic rights and its long-term interests both in Zimbabwe and the region. Most repressive governments rest assured in the knowledge that at some point in future, those in the human rights and democracy promotion community will get tired and even betray each other. These governments, in the sub-Sahara, led by Paul Biya of Cameroon, Robert Mugabe of Zimbabwe, Teodoro Obiang Nguema Mbasogo of Equatorial Guinea, José Eduardo dos Santos of Angola and King Mswati of Swaziland know this very well. They simply stage elections every few years, with the financial support of the international community. They do this to justify their continuing reign, but these elections have no credibility. For example, Biya is credited with a creative innovation in the world of phony elections. In 2004, annoyed by the criticisms of international vote-monitoring groups, he is said to have paid for his own set of international observers, six ex-U.S. congressmen, who certified his election as free and fair.
Secondly, after staging phony elections, they capture every crucial state institution through the creation of a conflated party-state. Subsequent to this, they can easily switch off their violence apparatus and begin to resort to subliminal and covert rights abuses such the selective application of the law. Through providential intervention, these governments often discover minerals during the height of crisis, and use the power clout that comes from the minerals to redefine the dynamics of geopolitics and re-negotiate entry into the international fold.
In light of this rising new challenge, civil society in Zimbabwe must continue speaking truth unto power, through an emphasis of universal human values in the Universal Declaration of Human Rights which sets a common standard of achievement for all peoples and all nations. Civil society must also remind the EU of these values which are littered in the Lisbon Treaty, respective foreign policies of EU states and all instruments of cooperation with Africa.  It is these values, rather than the state of the opposition politics that should guide EU policy on Zimbabwe.
One would describe the current MDC troubles as a process of metamorphosis of opposition politics from a caterpillar into a butterfly rather than the end of opposition politics. These squabbles were bound to happen given that the original MDC was a coalition of diverse forces with little, if anything in common in their backgrounds save for a shared commitment to multi-party politics. Those who have an enduring interest on Zimbabwe should see the MDC development as a positive move that will give birth to real multi-party politics rather than politics defined by two political horses.  The EU needs to be reminded that backtracking on human rights and democracy promotion commitments encourages and emboldens political retrogression while at the same time depressing those who truly believe in the advancement of human rights and democratic values.
The Zimbabwe Human Rights NGO Forum acknowledges the views of Jeffrey Smith of the Robert F Kennedy Centre in informing the analysis.