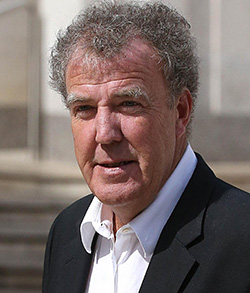 THE cast and crew of TV’s Top Gear had to abandon their cars at the roadside and flee Argentina after being pelted with stones by an angry crowd.
The attack happened after it emerged they were using a vehicle with a number plate apparently referring to the Falklands War.
That vehicle – a Porsche with the registration number H982 FKL which some people suggested could refer to the Falklands conflict of 1982 – was among those abandoned.
BBC bosses have said the number plate was merely a coincidence and was not chosen deliberately, but it led to protests in Argentina, including a demonstration by a group of war veterans who protested outside the hotel used by the show team.
The programme has already run into problems this year, with one edition found to be in breach of Ofcom’s broadcasting code for the use of a racially offensive term during a two-part special filmed in Burma, following a complaint from a viewer.
And presenter Jeremy Clarkson apologised after unbroadcast footage emerged in which he appeared to use the n-word, although he denied actually saying it.
The team from the BBC Two show are in South America filming a special on a remote highway passing through Chile and Argentina.
A story about their visit in the Patagonian daily newspaper Diario Jornada is headlined: “Top Gear is filming in Patagonia and there’s controversy.”
The paper said: “Even though the BBC authorities asked the popular presenter Jeremy Clarkson to behave himself during his time in Argentina, he chose to use the provocative number plate H982 FKL on his Porsche, in reference to 1982 Falklands (Malvinas).”

But the executive producer of Top Gear, Andy Wilman, said: “Top Gear production purchased three cars for a forthcoming programme; to suggest that this car was either chosen for its number plate, or that an alternative number plate was substituted for the original, is completely untrue.”
Meanwhile Clarkson has described the moment the Top Gear crew was attacked by an angry Argentinian crowd armed with rocks and pickaxe handles as “the most terrifying thing I’ve ever been involved in”.
Clarkson told The Sun: “I’ve been to Iraq and Afghanistan, but this was the most terrifying thing I’ve ever been involved in.Advertisement

“There were hundreds of them. They were hurling rocks and bricks at our cars. This is not just some kind of jolly Top Gear jape – this was deadly serious.”
The team returned to the UK Saturday morning, after being besieged at their hotel by Argentinian war veterans.
Clarkson insisted, “For once, we did nothing wrong.”
In a series of tweets, he said: “All TG crew now safely out of Argentina. I just got back to UK.
“The number plate WAS a coincidence. When it was pointed out to us, we changed it.
“And these war veterans we upset. Mostly they were in their 20s. Do the maths.
“They threw us out for the political capital. Thousands chased crew to border. Someone could have been killed.
“This was not a jolly jape that went awry. For once, we did nothing wrong.”