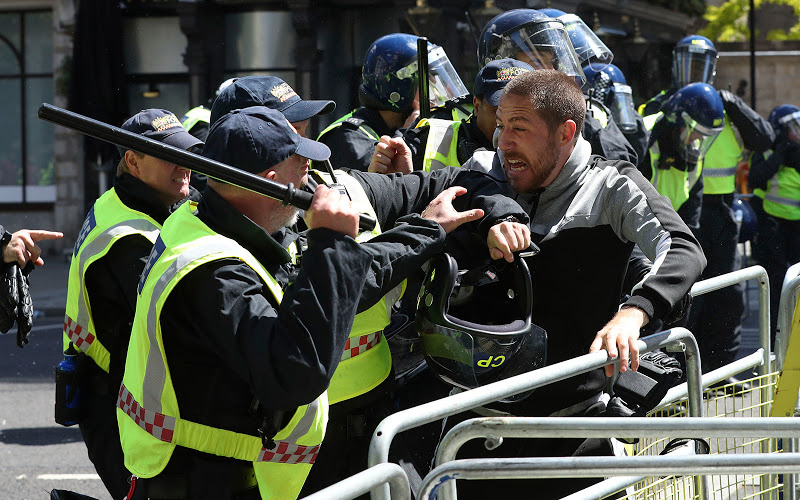 Protesters at a demonstration linked to far-right groups clashed with police in central London on Saturday, after gathering to counter an anti-racism march despite officials urging people not to turn out due to coronavirus restrictions.

Thousands of people appeared to have defied the rules in and around Parliament Square, with footage on television news channels showing violent scuffles with police as some agitators threw punches and objects at officers.

“Any perpetrators of violence or vandalism should expect to face the full force of the law,” she said on Twitter, as footage of the disorder was shared widely on social media.

“Violence towards our police officers will not be tolerated,” she added, noting Covid-19 remained “a threat to us all” and those assembled should “go home”.

A protest by the Black Lives Matter group planned for Saturday had instead been held on Friday to avoid clashes with self-styled “patriots”, who had vowed to turn out to protect memorials damaged at anti-racism demonstrations last weekend.

Paul Golding, the leader of fringe far-right political group Britain First, which has seen its members jailed for hate crimes and been banned from Facebook, was among the first to assemble in Parliament Square.

He told the domestic Press Association news agency they had turned out to “guard our monuments”.

“Anyone who comes along today to try and vandalise them will probably be dealt with by all of these Englishmen that turned up, and they’re fed up as well,” he said.

A march by several hundred Black Lives Matter activists through the UK capital still went ahead at lunchtime Saturday, ending in Trafalgar Square near where the counter protesters had gathered and amid a heavy police presence.

London’s Metropolitan Police had said those who had ignored the pleas not to protest must comply with conditions imposed, including keeping to separate designated areas and dispersing by 1600 GMT.

“We are asking you not to come to London, and let your voices be heard in other ways,” Bas Javid, a Met commander, said in a statement ahead of the events.

Britain has seen a wave of protests prompted by the death during a US police arrest of George Floyd, an unarmed African-American, which has triggered outrage around the world.

The majority have been peaceful, but demonstrations in London last weekend latterly turned violent while crowds in Bristol, southwest England, toppled a statue to a 17th century slave trader Edward Colston and threw it into the harbour.

Prime Minister Boris Johnson on Friday said the protests had been “hijacked by extremists” while criticising the targeting of statues as “absurd and shameful” and also urging people not to rally.

The comments drew criticism from some opposition MPs, with Liberal Democrat Home Affairs spokeswoman Christine Jardine accusing him of “stoking division and fear in our communities by suggesting they have been hijacked by extremists.”

Several central London memorials were boarded up as a precaution ahead of Saturday, including one of World War II leader Winston Churchill – which was defaced with the word “racist” last weekend — and the Cenotaph war shrine.

But he told the Daily Telegraph: “The idea that the hard right should stand guard over Churchill is absolutely repulsive.

“It feels like a society that has lost its compass.”

Anti-racism group Hope Not Hate warned ahead of Saturday’s protests that hooligan gangs attached to some English football clubs intent on violence were planning to attend.

“For those in central London today, please be care(ful). Football hooligan gangs and far right activists are still planning to descend on the capital,” said Nick Lowles, of the organisation.