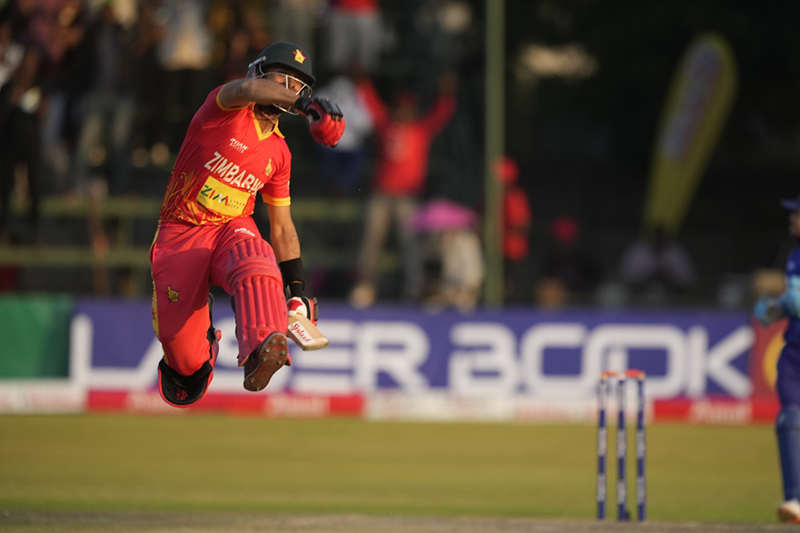 HARARE: Shubman Gill made his first international hundred as India beat Zimbabwe by 13 runs after a tense finish in Harare on Monday to complete a 3-0 ODI whitewash.

Gill not only wreaked havoc with the bat, he also caught Zimbabwe centurion Sikandar Raza, who was threatening to give the home side a shock victory.

“I was just trying to minimise my dot-ball percentage. I just tried to time the ball and not hit it hard,” he said.

“The bat was pretty good and that is why I changed it after my fifty as I wanted to save it. Always special to get a hundred. I had made three nineties but wanted to get a century.

“I have being playing with a great bunch of players for sometime. This one is for my dad as he has been my primary coach.

“I got a bit of a schooling the day before yesterday when I was out on 33. So this century is for him.”

After India captain KL Rahul won the toss and batted, the tourists posted 289-8 in 50 overs. Zimbabwe were all out for 276 in reply with three balls remaining.

The tourists looked set for victory when they reduced the home side to 122-5 with all the regular scorers bar Raza back in the pavilion.

But Pakistan-born Raza shrugged off poor form in the first two matches to smash 115 and leave Zimbabwe needing 17 runs off 12 balls for victory.

The tail could not deliver, and a gallant run chase by Zimbabwe came up short.

The breakthrough century for 22-year-old Gill came less than a month after he came agonisingly close, scoring an unbeaten 98 against the West Indies in Port of Spain.

He shared a 140-run third-wicket partnership with Kishan, who reached his half-century before being run out by Tony Munyonga.

From the first ball of the final over Gill sought a boundary, but achieved height rather than length off a Brad Evans delivery and was caught at long-off by Innocent Kaia.

Luck was twice on Gill’s side as he survived a close leg-before appeal on 97 and was dropped by Victor Nyauchi on 110.

Evans, the son of a former Zimbabwe international, was the only bowler to impress, taking a career-best 5-54 in 10 overs.

Raza, regaining the form that brought him unbeaten centuries in two ODIs against Bangladesh, faced 95 balls and struck three sixes and nine fours.

Among the Zimbabwe top order, Sean Williams (45) did best with an innings that included seven fours. Evans (28) shared a 104-run eighth-wicket stand with Raza.

Avesh Khan (3-66) took the most wickets among the Indian bowlers, but while Shardul Thakur (1-55) was expensive, he claimed the prized wicket of Raza.