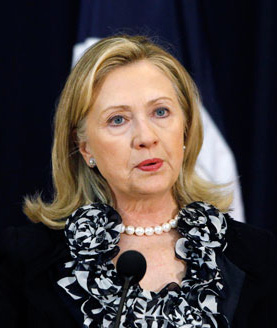 HILLARY Clinton cast herself as a champion for everyday Americans on Sunday, kicking off her long-awaited second run for the White House with a vow to fight for a level playing field for those recovering from tough economic times.
Clinton, who begins the 2016 presidential race as the commanding Democratic front runner, entered the fray with a flurry of video, email and social media announcements that indicated she had absorbed some of the lessons of her painful 2008 loss and would not take anything for granted this time.
When she lost the Democratic nominating battle to Barack Obama, her campaign was heavily criticized for conveying a sense of arrogance and entitlement, and for being out of touch with the party’s progressive wing.
This time, the video launching her campaign portrayed her as a warmer, more empathetic figure and laid the groundwork for a more populist economic agenda.
Eight years ago, her launch message was “I’m in it to win.” On Sunday, she shifted the attention to voters, declaring on her new website, “Everyday Americans need a champion. I want to be that champion.”
Her roll-out included a sophisticated use of social media, including Twitter, Facebook and YouTube – a contrast to her last campaign which was seen as less adept than Obama’s at using technology to convey messages.
But showing a more down-to-earth side while connecting with ordinary voters will be a challenge for Clinton, one of the most famous figures in the United States after decades as the wife of former President Bill Clinton, a U.S. senator and secretary of state. Indeed, her launch drew praise from French and German government ministers.
While Clinton enters the race as prohibitive favourite to be her party’s presidential nominee, a crowd of potential candidates are vying for the Republican nomination.
Stresses economic issues
Clinton’s campaign will be based around her plans to address economic inequality and will tout the historic nature of her effort to become the first woman U.S. president, aides said.
In announcing her presidential bid in 2007, Clinton spoke to the camera alone while sitting on a couch and asked voters to join her later for a series of Web chats.
Advertisement

This time, her video featured a mix of Americans talking about their futures and their economic troubles, along with images of Clinton in listening mode and only a small snippet of her speaking.
Her announcements featured strong words but no specific policy proposals about the struggles of working Americans and the need for economic equality. That included a shot at executive salaries that reflected populist rhetoric to a degree that could raise alarm among her Wall Street backers.
“Families have fought their way back from tough economic times. But it’s not enough – not when the average CEO makes about 300 times what the average worker makes,” Clinton said in an email to supporters.
One analyst noted the picture of Clinton on her launch website, holding a paper coffee cup and talking to a gray-haired man and woman, showed her appreciation for one set of voters.
“Having your maiden voyage launched with senior citizens may not look like the future but it’s a core constituency,” said Linda Fowler, a political scientist at Dartmouth University.
Aides have said Clinton’s campaign schedule will feature plenty of smaller events where she can listen to voters. She will visit Iowa, which holds the kick-off contest in the nominating process early in 2016, this week on a “listening tour.” It will include a roundtable discussion with students and educators on Tuesday and small business owners on Wednesday.
“I’m going to work my heart out to earn every single vote, because I know it’s your time,” Clinton said in her email to supporters. She mentioned her father’s small business, her mother’s “tough childhood” and her baby granddaughter.
Opinion polls show Clinton has a huge lead over potential Democratic rivals, and few are expected to enter the race. A Reuters-Ipsos tracking poll shows Clinton backed by more than 60 percent of Democrats.
Massachusetts Senator Elizabeth Warren, a favorite of the party’s liberal wing who says she is not running, is a distant second at 18 percent.
So far, only former Senator Jim Webb of Virginia and former Maryland Governor Martin O’Malley, who both languish in single digits in polls, are the only Democrats to make moves toward a candidacy.
Pre-emptive strikes
Even before Clinton entered the race, potential Republican opponents took swings at her.
Former Florida Governor Jeb Bush criticized her guidance of U.S. foreign policy as secretary of state.
“We must do better than the Obama-Clinton foreign policy that has damaged relationships with our allies and emboldened our enemies,” Bush said in a video released by the political action committee Right to Rise.
Many Democrats have been waiting for Clinton to get back into the White House fight since the day in June 2008 when she pulled out of her primary battle against Obama with an expression of regret that she could not crack “that highest and hardest glass ceiling this time.”
But Clinton still has to convince some liberals that she is the best candidate to tackle issues like income inequality and the power of Wall Street banks. Some liberal groups are pushing Warren, who has vocally criticized some Wall Street practices, to challenge Clinton.
The Clinton campaign’s finance chair, Dennis Cheng, emailed donors and bundlers on Sunday telling them to expect an email message from Clinton herself explaining her vision for the campaign and the presidency.