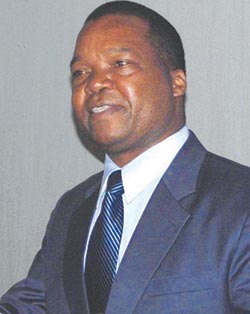 THE International Monetary Fund has advised the central bank to close troubled banks or at least ring fence them to address the deteriorating asset quality and restore confidence in the country’s financial sector.
Early this month, Finance Minister Patrick Chinamasa said up to five Zimbabwean banks were ‘ill’ but were not contagious due to their small size.
Zimbabwe’s banks are struggling due to inadequate capital and growing non-performing loans (NPLS), which has prompted the central bank to consider establishing a body to take over bad loans.
NPLS rose to 16.96 percent as at end of the first quarter to March, up from 15.92 percent in the previous quarter.
The IMF said some banks in the country were insolvent and while they were not systemically important, there is a risk of disorderly resolution of these banks, which could further affect already weak confidence in the system.
“To address deteriorating asset quality and restore confidence, serious consideration should be given to closing troubled banks (if non-systemic), or at least ring-fencing them, for example, by restricting their ability to take new deposits from the public,” said IMF in a report on Zimbabwe released after the institution’s latest Article IV Consultations.
However, in its first quarter review, the central bank said at least 14 of the 20 banks in the country had met the minimum capital requirements, indicating a relatively ‘healthy’ situation.
The IMF said although the central bank has indicated that it was developing a framework to deal with NPLs, any strategy to deal with the issue should avoid rewarding poor past lending decisions and should be accompanied by a strong focus on the risk that current economic conditions and poor lending practices could result in further growth in bad loans.
It said the decision by RBZ to add more time to allow banks to meet minimum capital requirements was justified, as the June 2014 deadline for reaching a minimum capital of $100 million was looming with most banks being far below that level.
“In the period ahead, the RBZ will need to closely monitor observance of the interim milestones for progress towards the December 2020 minimum capital requirements.”Advertisement