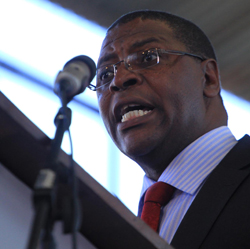 GOVERNMENT departments came under fire at the just concluded conference for clothing sector for failing to promote local products by opting to import their uniform requirements.
The sector, which is virtually on its knees due to flooding of cheap imports and lack of liquidity to reinvest in their operations, said support from major government departments would go a long way in revitalising the industry.
At its peak in the ’90s, the sector employed over 35,000 people with the numbers having gone down to around 8,000 due to a cocktail of challenges.
Capacity utilisation is hovering around 30 percent with many clothing and textile firms having shut down or scaled down operations due to operational constraints.
The departments, which were under the spotlight at the two-day clothing conference on Friday and Saturday included the Zimbabwe Revenue Authority, Zimbabwe National Army and the Zimbabwe Republic Police.
Zimbabwe Clothing Manufacturers Association (ZCMA) chairperson Jeremy Youmans said it was critical that the government and other stakeholders tackle local procurement.
“Local procurement is something that we need to deal with more seriously. I do not understand why they are allowed to buy outside the country when they are using our money to do that,” he said.
Players said government departments must set aside a certain percentage of their purchases for the local industry if they felt the manufacturers had no capacity to meet huge orders.
“It beats me why the police and the army import their clothing. If these are procured locally, it would make a huge difference,” said Confederation of Zimbabwe Industries chief executive Clifford Sileya.
Stan Mangoma a director in the Ministry of Industry and Commerce said it was critical that the local industry be supported.
“We have to change our mind set of viewing imported goods as superior. Let us try and buy local where it is available,” he said.
The stakeholders maintained that they could make better quality products for the government departments compared to some imported clothing which the institutions bought.
They said it was critical for the institutions to work with the local industry to address quality and other concerns instead of resorting to imports.Advertisement

“Retail outlets must insist on quality from local manufacturers. As long as we do not work together, we will not achieve our goal,” said Evelyn Ndlovu the Permanent Secretary in the Ministry of Small and Medium Enterprises and Cooperative Development.
Buying local did not involve the hustles and anxiety caused by having to ship orders from mainly the Far East, the stakeholders said.
Others however bemoaned corruption which they said resulted in government departments adopting a “buy from a Zimbabwean” mentality.
The stakeholders accused some government institutions of corruptly awarding tenders to locals who then imported the orders.
“Lots of shelf companies have been formed and they are importing the stuff and selling to government departments,” said ZCMA’s Shyne Lindsay.
The clothing industry stakeholders also criticised government departments for failing to pay local suppliers on time in the little instances they decided to buy local while they paid for imports in advance.
“Such delays are resulting in some companies closing down as they go for months without having been paid,” said one contributor.
Ashley Naidoo from South Africa urged the local industry to put their house in order as it had potential to compete with the best in the region.
“We believe you guys are good and can be a threat in Southern African region,” he said.
Meanwhile, the ZCMA has adopted a new logo to distinguish locally made clothing and textile products from imports.
The logo written “Made in Zimbabwe With care” along with an artistic design of a rising sun with the colours of the Zimbabwean flag representing the sun’s ray.
Youmans said it was also critical that local retailers distinguish between imported and locally made clothes to allow buyers the choice.
The two-day clothing conference ran under the theme “Made in Zimbabwe.”