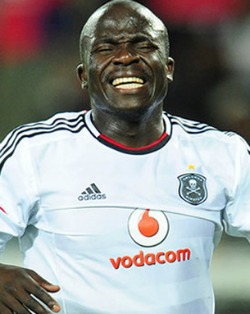 TAKESURE Chinyama has wasted no time in his bid to find a new club ahead of the 2012/13 season after the recently released Orlando Pirates striker began training with Bidvest Wits this weekend.
The Zimbabwe international’s contract in Soweto was allowed to expire, with the Buccaneers opting against extending his stay as they look to make space for several reported off-season arrivals.
The 30-year-old is now hoping to impress with the Clever Boys, who are under a squad reshaping of their own following Gavin Hunt’s arrival as coach last month.
Hunt is understood to be keen at add more bite and weight up front in his squad this season.
The only concern about Chinyama, however, is that he is injury prone, which is partly why Pirates decided to let him go.
The forward is already understood to be also wanted by both newly promoted clubs Polokwane City and Mpumalanga Black Aces.Advertisement