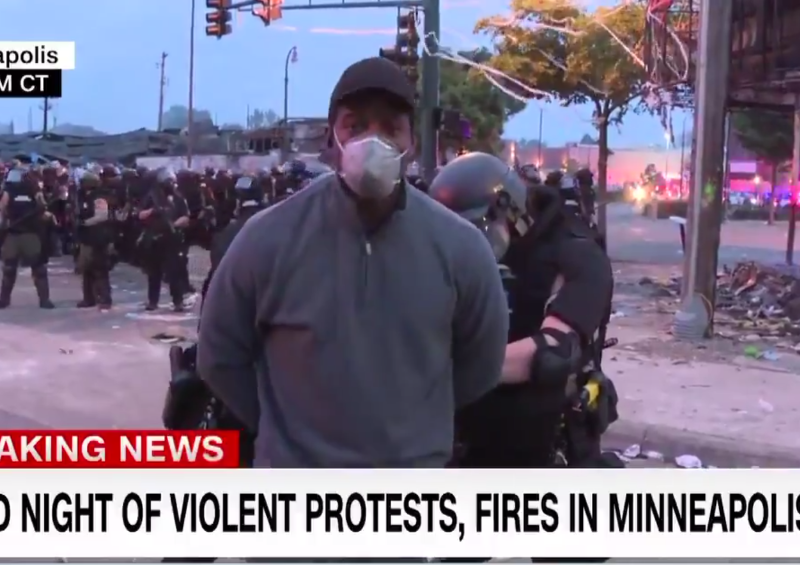 A CNN reporter has been released after being arrested while covering protests in Minneapolis over the death of an unarmed black man.

Omar Jimenez was led away in handcuffs while he was live on air early on Friday. His cameraman and producer were also detained, apparently because they did not move on when told.

They were released without charge.

Jimenez was in Minneapolis, reporting on a third night of violent protests over the death of George Floyd. On Tuesday a video emerged, showing a police officer kneeling on Floyd’s neck, despite him saying he could not breathe.

Jimenez was reporting live on an arrest happening in the area where a police station was burnt out.

After the crew caught the arrest on camera, police officers started moving towards them and instructed them to move.

On the video, Jimenez identifies himself as a CNN journalist and can be heard telling the officers: “We can move back to where you’d like here. We are live on the air at the moment.”

An officer in riot gear then says, “You are under arrest” and leads him away in handcuffs.

CNN called the arrests a “clear violation of their First Amendment rights” in a tweet. The First Amendment to the US constitution protects freedom of speech and of association.

The Minneapolis State Patrol confirmed the arrests and said those detained were released “once they were confirmed to be members of the media”.

But Governor Walz, said he took “full responsibility” for the incident.

“In a situation like this, even if you’re clearing an area, we have got to ensure that there is a safe spot for journalism to tell the story. The issue here is trust,” he said during a press conference.

He added that there was “absolutely no reason something like this should happen”.