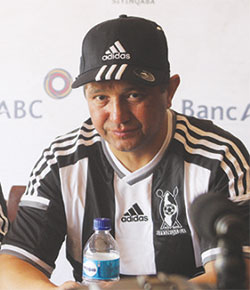 ELROY Akbay thrust himself into spotlight with a good day in office in Highlanders’ opening PSL match, with a 3-0 thumping of Hwange at the Colliery Stadium last Sunday.
The Dutchman already a darling of Barbourfields following an impressive pre-season, has heightened expectations on him as the Bulawayo giants prepare to face FC Platinum in their next match at Barbourfields Stadium on Sunday.
But Akbay would be facing familiar opponents as Highlanders beat FC Platinum to storm into the ZNA Charities Shield final.
Highlanders would be seeking to prove that beating Chicken Inn in the ZNA Charities Shield quarter-finals as well as the FC Platinum victory and the Hwange triumph are no fluke.
Akbay appeared more demanding after the Hwange match, saying his charges sometimes draw themselves out of the game.
“We had a bad first half and I was failing to get what was happening with my boys. But everything went well in the second half and we got the goals,” Akbay said.
“It seems these boys are sometimes reluctant to play football and it is surprising. They have to play football if the results are to continue our way and I can tell you we would be a far much better team. I just want us to play some purposeful football in the games to come.”
Sunday’s confrontation with FC Platinum is a potential explosive match as the platinum miners also started their campaign on a positive note following a 2-1 win over Tsholotsho last Saturday