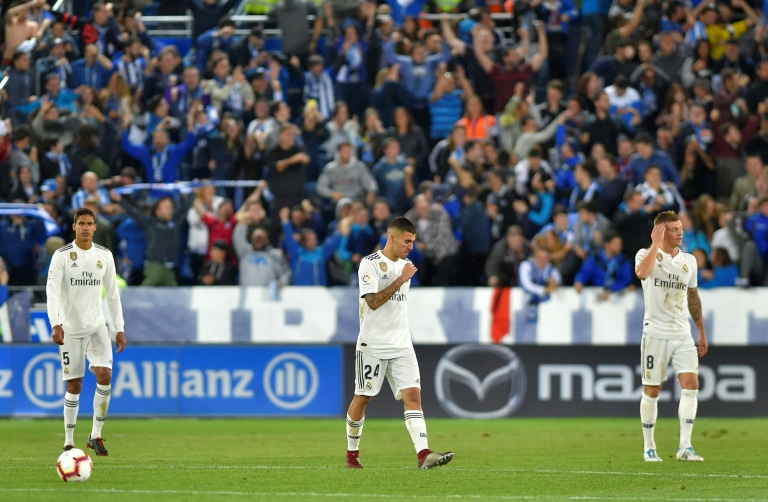 Julen Lopetegui insisted it is too early to be questioning his future despite Real Madrid suffering a shock defeat by Alaves on Saturday to make it four games without a victory.

It is four games without a goal too for the European champions, their longest scoring drought since 1985, as Manu Garcia headed home in the 95th minute to send the Mendizorrotza Stadium wild.

It is the first time they have beaten Madrid at home in 87 years.

Alaves fans ran onto the pitch to celebrate their stunning 1-0 win and the chants continued long after the final whistle.

For Real, this was another body blow and to make matters worse, Gareth Bale and Karim Benzema, their chief attacking threats, were both forced off injured. Bale had missed the Champions League loss to CSKA Moscow on Tuesday with a groin strain.

It means Barcelona can go three points clear if they win their game in hand against Valencia on Sunday while Alaves’ excellent start to the season continues. They move up to third, level on points with Real.

Lopetegui had been asked on Friday if he felt under pressure at the club he left Spain for on the eve of the World Cup and the question was put to him again after the match here.

“It interests you but is not a question that concerns me,” Lopetegui said.

“We know what the life of a coach is, especially at Real Madrid, but we also know it is October and you have to keep perspective and stay calm.”

Captain Sergio Ramos was more emphatic. “It’s other people who make those decisions but it’s never good to have a change of coach,” he said. “It would be crazy.”

Talk of change feels premature but it will increase if Madrid fail to find fluency soon and, in particular, if Barca pull away. The Clasico at the Camp Nou looms at the end of the month.

“We are disappointed,” Lopetegui added. “In the end, defeat is a harsh punishment.”

Thibaut Courtois took over from Keylor Navas in goal and was at fault for Alaves’ winner. The Belgian edged out but failed to claim a cross, leaving Garcia to head into any empty net.

Supporters behind that goal had unfurled three banners during the match that read: ‘A club is not made great by its titles but by its people’.

Some of the 19,000 fans here might have seen their team beat Madrid at the Santiago Bernabeu in 2000, but not at home. It was 1931 when that last happened.

There was a UEFA Cup final too in 2001, which they lost to Gerard Houllier’s Liverpool, but recent years have been tough, with three seasons spent in the third tier. Alaves climbed their way back up and reached the final of the Copa del Rey in 2017. But for drama, this will be hard to beat.

“I feel very proud,” Garcia said. “It is the most beautiful day of my sporting life.”

Bale had been passed fit to start while Luka Modric and Ramos returned after being rested against CSKA.

Ramos clattered Jonathan Calleri early on and then elbowed the Alaves striker in the face. The referee deemed it accidental but Calleri responded with a clip on the defender’s leg.

Bale span in behind and backheeled to Benzema, who teed up Dani Ceballos to shoot. Benzema had a header volleyed off the line by Victor Laguardia.

But Alaves grew into the half and it took Raphael Varane’s diving header to prevent Ibai Gomez from tapping in at the back post.

Benzema was replaced at half-time by Mariano Diaz, who instantly looked more dangerous.

The rain came down and the whistles grew louder as Madrid dominated the ball but their opponents could have won it sooner when Jony sprinted clear, only to drag his finish wide.

Bale trudged off and another Alaves chance arrived in injury time. Courtois came for the cross but failed to gather and Ruben Sobrino sent the ball to the back post. Garcia was perfectly placed.