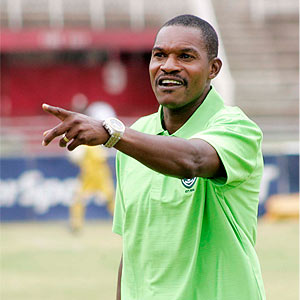 FC PLATINUM’S five-point gap at the top has placed them on firm position, to win their first ever league title and coach Norman Mapeza wants his charges to consolidate their lead.
The platinum miners beat Triangle 2-1 away on Sunday, to end a three-match winless streak that had threatened to derail their title march.
Tarisai Rukanda and Nqobizitha Masuku were on target for Mapeza’s side while Tichaona Mapungwana scored for Triangle.
Mapeza and his men have to thank second-placed Caps United, who lost 3-1 away at Bulawayo City and created a five-point gap between them and FC Platinum.
FC Platinum however showed character by claiming three points from enemy territory against a Triangle side that had won its last two matches coming into this game.
“It was a good game and I am happy we managed to collect three points. The guys played well and we were rewarded with this win,” Mapeza said.
“I am happy we created some chances and we managed to utilised them. Winning away is not easy especially against a team like Triangle but, we managed to do that. Now the challenge is in keeping up with the momentum as well as maintaining the gap we have opened at the top. WE have always been the team to beat so it is going to be difficult for us in the upcoming games.”
Mapeza’s outfit is looking for a maiden league crown.