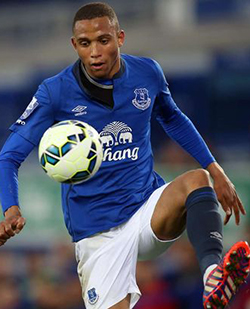 ZIMBABWE born Everton defender Brendan Joel Zibusiso Galloway charmed coach Roberto Martinez with a fine display against newly promoted Watford in the opening league match of the season at Goodison Park last weekend.
The 19-year-old Zimbabwean was thrust into the left back position replacing injured first choice Leighton Baines and was deservedly showered with praise by Martinez.
It was his second match after making his debut for the Merseyside club in a 2-1 win over West Ham in May 2015.
“Brendan Galloway is a young man but when he plays, he is an out and out defender.
“He has been very impressive and is someone who can play in that position for us for a long time,” Martinez told the club’s website.
Galloway, together with youth graduates Tyias Browning and Mathew Pennington, have all been tipped to succeed in the Toffees first team by club captain Phil Jagielka.
“I have been impressed with them,” said Jagielka.
“It is a position that we are probably a little bit light on as far as experience goes but we are more than happy with the standard of the lads coming through.”
He added: “Looking to the right of me, the central defenders that I am get to play with are quite a lot younger than me!
“But it is a good challenge for me and I try to give all of them as much information as I can on and off the pitch.
“The young lads try and listen as much as they can and hopefully they will have a good future.”
Everton left-back Seamus Coleman added:  “It’s always going to be tough losing a player of Leighton Baines’quality.
“But we know Brendan is a good player from when he played the last two games of last season and we’ve got good hopes for him here.
“He’s a great lad around the place, he has done well when he’s played and we’re sure he’ll continue to do so.”
Galloway moved to England from Zimbabwe with his family when he was only six and started playing for Milton Keynes Dons (MK Dons) when he joined the club’s under-11 side.
He became the youngest first team player in MK Dons’ history at 15 years of age after making his debut in a 6–0 victory at home to Natwich Town in the FA cup in November 2011.
The defender then made his league debut after starting for MK Dons in April 2012 against Rochdale.
In August 2014 Everton signed Galloway for an undisclosed fee on a five-year contract.Advertisement