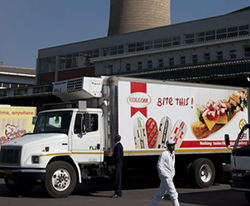 HARARE: Food processor Colcom on Friday said sales were higher in the quarter to September 30 compared to the same period last year, with revenue also on the rise.
Chief executive Dino Tumazos told the company’s annual general meeting that although revenue was higher, this did not translate to an increase in gross profit due to lower average selling prices. He did not give figures.
But profit before tax was higher because of modest savings in operating expenses, he added.
The company’s Triple C recorded an increase in volumes as well as increased revenue. However, the cost of key raw materials, particularly maize rose significantly, offsetting the benefits of production efficiencies achieved.
“The group’s auxiliary pig production facility, which came on line in March 2016, added 150 pigs per week to production has contributed to a 34 percent increase in pigs delivered in Q1 (compared to) deliveries last year,” said Tumazos.
The high maize prices were a major concern to the group, he added.
“At the end of the quarter, the cost of maize was 15 percent higher than last year. The regional shortage of maize will result in further increase in raw material prices before the next harvest,” he said.
Southern Africa experienced the worst drought for 25 years, induced by El Nino weather phenomenon, which left millions in need of food aid.
The ongoing cash crisis was posing a problem in procuring beef, particularly from communal farmers, Tumazos said.
Its retail unit, Texas Meats opened shops in Makoni, Chegutu and Harare.
Colcom’s major shareholders include Innscor, which holds a 79.27 percent stake, Old Mutual Life Assurance with an 8.57 percent stake and Old Mutual Zimbabwe Limited with a 1.26 percent shareholding.Advertisement