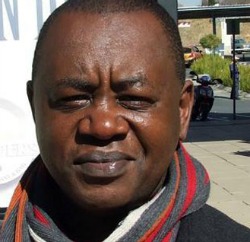 RENOWNED economist and People’s Democratic Party Secretary for Finance and Economic Affairs, Vincent Musewe, says the Reserve Bank of Zimbabwe (RBZ) is under political lock with no capacity to solve the current liquidity challenges facing the country.
Speaking at cash crisis and bond notes public meeting in Bulawayo at the weekend, Musewe said no amount of interventions or policies can address the cash crisis in the country apart from political reforms.
“The government has destroyed the financial and production sectors. They have created a mechanism of spending all revenue through buying expensive vehicles and sending their children to expensive schools outside the country.
“There is no reason why people should be suffering because the country has got 16 trillion worth of wealth,” said Museve.
Museve said the government last year splashed a whopping $35 million on expensive vehicles and cell phones, a development which he said is not sustainable in an under-performing forming economy.
“We are in this situation because we are busy importing goods using US dollars while we are not producing. Our economy can’t grow under those circumstances. The other problem is that we are borrowing too much and we cannot repay. The only solution to get out of this is to remove the government,” he said.
Museve said while RBZ has skilled technocrats it cannot address the cash liquidity because of political interference.
“Our leaders do not share the same vision with technocrats. They still live in the Cold War era. Anyone who tries to challenge them is a sell-out,” he said.
Advertisement