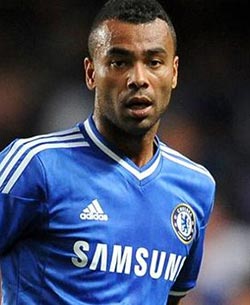 ASHLEY Cole was expected to play in Saturday’s FA Cup tie at Manchester City due to defensive fitness concerns, but instead Mourinho continued with Gary Cahill (calf) at centre-back and Cesar Azpilicueta played at left-back.
Cole has made four starts since the turn of the year – when right-back Branislav Ivanovic was injured – after struggling to reclaim his place following an earlier rib injury, with Spain right-back Azpilicueta thriving on his ‘wrong’ flank.
The 33-year-old England centurion is out of contract at the end of the season, although Mourinho has spoken of his wish for an extension to be offered.
It is uncertain if Cole would accept, with lucrative offers likely to come his way, with his suitors reportedly including Major League Soccer’s New York Red Bulls.
Cole has been first choice for over a decade at Arsenal and Chelsea, but now his England squad place is under threat with Leighton Baines first choice and Southampton’s Luke Shaw and Kieran Gibbs of Arsenal also in contention.
Asked if Cole could be given a run in the team in the coming weeks, Mourinho said: “I don’t know. I’m very happy with the way Azpilicueta is performing.”
Mourinho has insisted throughout this World Cup season – in relation to Juan Mata, for example – that the tournament is not his concern.
He believes some international bosses have tried and tested favourites, whether the players are playing or not.
But Roy Hodgson’s loyalty to Cole could be tested when the England boss names his squad for next month’s friendly with Denmark, with Shaw in line for inclusion.
Mourinho added: “I cannot think in national teams at the same time as thinking about my team.
“There are national team managers that are very clear: they go with their players. It doesn’t matter if their players are playing in the club, (if) they are not playing, they go with their players.
“All these years as a club manager, I found lots of them like this.”
Cole’s team-mates John Terry and Frank Lampard are also out of contract at the end of the current campaign.Advertisement