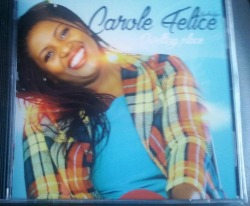 HIGH RIDING gospel singer, Carole-Felice Nyakudya, who recently launched her third album The Dwelling Place, says collaborations with renowned musicians have paid dividends.
This follows the high demand for song eight from the album by fans across the globe.
Speaking to NewZimbabwe.com from her base in United Kingdom, Carole said featuring renowned gospel artists such as Sabastian Magacha and Tembalami have put an icing on her work.
“When I visited Zimbabwe I recorded songs with Sabastian and Tembalami at Eternity Studios under Macdeee, our producer,” said Carole.
The gospel singer is also a founding member the Zimpraise choir.
“It is a fun project that is easy to listen to and features songs such as Muimbire featuring Saba Magacha, Jesu anehanya featuring Tembalami.
“Their melodious voices gave my music the flavour that my fans were missing and helped me to minister through gospel music. I hope to continue collaborating with more musicians as this has helped me to grow as a musician.”

Her first album titled This is Now was nominated for the NAMA awards in Zimbabwe in 2005.
The mother of three was born in Zimbabwe where she attended St Dominic Chishawasha and Nagle House schools before moving to the UK, 18 years ago.
A multi-talented individual, Carole sometimes works as a youth leader, choir director and a motivational speaker.
Carole is also a community leader and founder of the Shekiner Glory Foundation-a UK registered charity that supports health and poverty relief projects; as well as promote educational programmes.
Carole is excited about being part of the UK Praise Explosion, FREE to Worship 5.
Advertisement