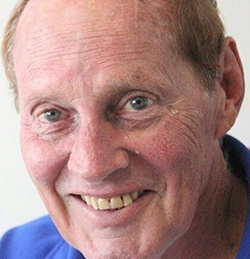 VETERAN broadcaster Dave Emberton, who passed on last Friday, has been described by colleagues as a loving and a humble man who will be greatly missed by the media industry.
The veteran journalist succumbed to heart failure surrounded by family in a Durban hospital in South Africa. He was 69.
Former ZBC-TV current affairs anchor and now freelancer Justin Mahlahla said it’s a blow to the industry.
“He will be missed; he taught me a lot,” said Justin Mahlahla.
Another former colleague Steve Dhehwa said, “Rest in peace Dave, learnt a lot from your humbleness. Though let down by the authorities during your last days you are in a better place now.”
Former ZBC Radio 3 breakfast presenter Simon Parkinson who also worked with Emberton said, “Condolences; worked with Dave at Pockets Hill throughout the 90s and what a joy, the industry will never be the same”
Journalist Angus Shaw added; “He was a true and loyal friend who always had positive thoughts and a helping hand for others.”
Emberton suffered from deteriorating health in the past two years.
He began his career as a broadcast reporter at Montrose Studios in Bulawayo at the age of 19 in 1966 and pioneered the first live voice reports from the Hwange’s Kandama mine disaster in 1972 which claimed 472 lives from a series of underground explosions.
Emberton became the host of sports, music and general interest programmes and was best known from the 90s when he presented and anchored ZTV’s News Hour right up to 2015.
After leaving full time work at the Zimbabwe state broadcaster, he joined media-related business ventures as an executive until taking up management responsibilities with the satellite provider DSTV.
Colleagues at the South Africa-based company described him as “a popular corporate team leader, a well-loved and compassionate ear and wise counsel to all friends and colleagues at DSTV for two decades until his retirement”.
Besides presenting news and other programmes, Emberton also featured in a star-studded local thriller movie titled Enigma: The Secret of The Circle with Dax Jackson, Stephen Chigorimbo and Kudzai Sevenzo.Advertisement