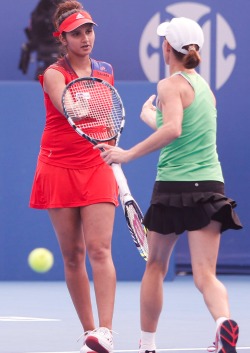 TENNIS star Cara Black and Indian partner Sania Mirza continued their miraculous form, as they triumphed at the China Open, winning the doubles title in Beijing on Saturday.
The Indo-Zimbabwean combination claimed their second title in row after demolishing Russian-Spanish duo of Vera Dushevina and Arantxa Parra Santonja 6-2, 6-2 in the summit clash.
Come-back mom Cara and Sania had won Pan Pacific Open in Toyko last week and the Beijing victory means two pair have now won nine matches on the trot.
As a result of Saturday victory, Miirza and Black received 1000 WTA ranking points along with $291,000 as the cash prize.
Speaking after the win Sania explained that the last time she had asked Cara to play doubles with her, two years ago, the Zimbabwean decided to have a baby. “I figured that would be easier,” Cara said, laughing.
The 26-year-old Hyderabadi said playing together was something the duo simply hadn’t got round to doing before the Asian swing this year, but it wasn’t for the lack of effort.
“We’ve been meaning too,” Sania said.
“But we weren’t able to put it together. Then it so happened that this year we were struggling with our respective partners, just before the US Open, we decided we’d play the Asian tournaments together as we were both without partners. So, here we are.”
Cara and Sania, who began their run in Tokyo two weeks ago, clinching the title in their maiden appearance together, then topped in Beijing last week in the China Open without so much as dropping a set.
“This is the best finish I’ve ever had to a year,” Sania said, “To win back-to-back tournaments that are just a level below Grand Slams feels incredible.”
“Obviously Cara has been no.1 in the world and must have enjoyed a better run, but for me, I’m still in shock, it hasn’t sunk in yet. This feels awesome.”
Cara, 34, and Sania have committed to playing together next year, but other than a brief outline, that will see them begin their year in Australia with the goal of making the season-ending championships, they haven’t made any specific plans.
“We have to sit down and work it out,” Cara said, “We’ll train together in the off-season, most likely in Hyderabad. We’re looking forward to fine tuning certain aspects of our play.”Advertisement

“Our games gel,” Sania explained, “we are opposites, who work well together. We are not in any great rush to prove people right or wrong, we’ll compete as best we can.”