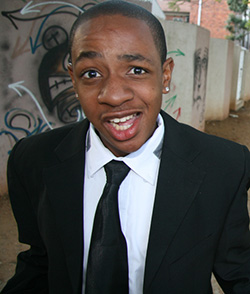 BULAWAYO-based stand-up comedian, Clive Chigubu is readying himself to bounce back on stage in November, after a three month absence from the comedy scene after going down with a serious illness.
Chigubu, who was diagnosed with meningitis in July spent almost two months in hospital.
While he has endured a lot of pain, Chigubu believes the past three months offered him an opportunity to introspect on his personal life and career.
The Lumbar puncture procedure left him bedridden and unable to use any of his limbs.
“I had a problem with my spinal cord because of the lumbar puncture. I couldn’t walk and sit for a long time. Physically I was weak but I had to feed my spirit.
“I had to imagine myself back on stage, while physically it seemed impossible because of the state I was in, I and to train myself to think positively,” Chigubu told NewZimbabwe.com.
While on the hospital bed, Chigubu refused to give up on life and his skyrocketing career. He kept himself busy and focused by writing his comedy scripts, which will form part of his comeback shows next month.
“I wrote a lot of scripts during my time in hospital and they will form the core of my comeback shows,” said Chigubu.
He says he would not have made it without the support from his fellow comedians who frequented the hospital and his home to check on me.
“Enough respect to all the comedians who visited me and encouraged to get strong. Some came all the way from Harare to check on me and that meant a lot to me. My spirit was really uplifted and aided my recovery,” said the rib cracker.
The other thing that boosted his spirit was the love and encouragement he received from his multitude of fans.
“I do not know how this happened, but there is a clip that started circulating while I was in hospital. It was my performance at a wedding just before I fell ill.
“It received a lot of support from people all over the world and they would send me messages encouraging me to churning out more acts.
“I was really touched and it gave me extra strength to fight on,” said Chigubu.
The illness taught the comedian the importance of life and changed his perspective on a lot of things.
“I really learnt a lot during this time, it taught me to overcome fear. If you allow fear to take over your life, it immobilises you and you fail to appreciate the positive things in life. Advertisement

“For me this was a test of faith more than anything and I now meditate more on scriptures,” he said.
Currently, Chigubu is busy with private functions and expects to be back on stage in November and he has promised his fans more bouts of laughter.