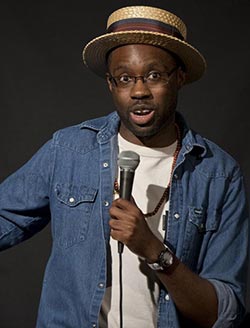 PHIL and Clara Gona left Zimbabwe in 1990 — with their not-yet 2-year-old son in tow — for an education. Their home country was, in Phil’s words, “the most wonderful place you could think of,” but there were no opportunities for graduate school there, and a fellowship at Boston University was too good for him to pass up.
Just as it had for Phil and Clara, who are now both professors in Boston, life in America offered their son something Zimbabwe couldn’t: the chance for Tawanda Gona to pursue his own dream of becoming a professional stand-up comedian. But Tawanda’s parents had hoped he would follow their path in academia, which is why he hid his aspirations from them for years.
“The last thing an immigrant would do is come all the way to America to become a comedian,” Phil says. “Why would you risk everything, you leave everything that you know behind, your life that you grow up with, to go elsewhere looking for opportunity, and the opportunity you look for, of all the opportunity in America, is comedy?”
Despite his parents’ reservations, Tawanda’s career has gained enough momentum to keep him pushing forward. He’s performed at comedy festivals outside of Boston, and though he hasn’t quit his day job in data entry, he’s typically onstage several nights a week.
Tawanda describes his parents as “freakishly accomplished.” Phil is an associate professor of biostatics at UMass Medical School, and Clara is an associate professor of nursing at the MGH Institute of Health Professions. Both have PhDs. They raised Tawanda to respect his Zimbabwean heritage.
Phil and Clara will often speak in Shona, their native tongue, at home, and try to instill in Tawanda the philosophy of Ubuntu, which, according to Phil, “is about being useful to humanity as a person, so your joy must come from serving others.” But Phil feels his son is missing out by learning about Zimbabwean culture from afar.
Tawanda believes he did get a sense of his Zimbabwean roots from watching his parents adjust to American customs. Once he left the house, everything outside was American, like hip-hop. In his act, he jokes about admiring rapper 50 Cent as a kid. “I wanted to be a gangsta, too, but I couldn’t, because my parents loved me very much.”
There was some cultural dissonance in his upbringing, but Tawanda’s parents made sure he had a sense of history. “It was American, but my parents would make sure it wasn’t too American,” he says.Advertisement

But it was a very American profession that caught young Tawanda’s interest. He remembers an uncle playing him a CD by Sinbad when he was just 3. That was the beginning. He started writing jokes at 15 and telling them at spoken word club at Boston Latin School. He was hooked. “I don’t want to do anything else,” he says. “I’ve wanted to be funny forever.”
He knew his parents wouldn’t be happy with his choice. There is no tradition of stand-up comedy as a profession in Zimbabwe, no cultural parallel.
As a teenager, he would sneak out to the Comedy Studio in Cambridge. Eventually he landed on a comedy club stage for the first time one fall night. Then an 18-year-old high school senior, Tawanda told his parents he was going to see a movie for extra credit. Instead, he took the train to Harvard Square.
He watched the other acts nervously, waiting for his turn, until club owner Rick Jenkins introduced him. “Then I come up onstage, I just start babbling,” he says. “I tell the first joke I ever wrote. It gets a laugh and I’m like, ‘Alright. This is excellent.’ When I tell a joke and it doesn’t work and it bombs I’m like, ‘Oh my God, this is what it’s like.’ ”
Worried they would be upset, he didn’t tell his parents about that night until months later, during an argument about his future. Then he showed them the DVD he had made at the Comedy Studio that night.
His parents weren’t entirely sure what to make of the revelation. “Oh, my goodness,” says Clara, laughing. “I was not thrilled. As parents, we were hoping he would pick an easier career.” Phil says they did not want to disappoint their son, but they weren’t impressed by his performance and didn’t want to give him false hope. “We couldn’t be discouraging his work,” he says. “At the same time, we couldn’t say, ‘Oh, this is great.’”
Now Tawanda is at a tipping point. “This is becoming my identity,” he says.
He reached his fifth anniversary in comedy in March, and he’s gotten out of Boston to play last year’s Cleveland Comedy Festival and this year’s Laughing Skull Comedy Festival in Atlanta.
He’s working more often, hitting open mikes four to five times a week and getting a few paying gigs per month, like his feature slot at the Shipyard in Quincy with headliner Wil Sylvince on June 7. But he has moved back in with his parents to save money after three years of living in an apartment and works a 9-to-5 job in data entry. He knows comedy might not work out long term. If that happens, he may go to grad school for communications.
Jenkins, owner of the Comedy Studio, tapped Tawanda for the club’s “Comic In Residence” program in February, and watched the comedian develop by getting to play six nights a week for a month. “He’s already at the point where he’s loosening up and being himself rather than trying to do what he thinks a comedian does,” he says. “I think he’s probably got another year to go, but he’s definitely on the right path.”
Onstage, Tawanda is confident and relaxed. He knows how to listen to a crowd, when to wait a beat to set up a punchline or let the laughter fade. His experience growing up in an immigrant household is part of his act, but not the main thrust.
He will talk about ethnicity — he wonders how he wound up with such a strong African name when his parents are named Phil and Clara. But he’ll also riff on pop culture references like “Sharknado.” His philosophy is broad and simple: “I try to write jokes about anything good that happens in my life,” he says.
That’s a positive, according to Jenkins. A comedian might be from another country, “but that doesn’t mean that that’s all they are,” he says.
During the Comedy Studio residency, Tawanda’s parents saw him perform in a club for the first time. They were there more to support than to encourage, according to Phil. While they still feel comedy is a risky profession, and they’d rather see their son go to graduate school, they were impressed.
“It’s difficult to put words to it,” says Phil, “but I was so amazed that you can, from this band of strangers, to say, ‘I’m going to make you, for the next few minutes, have a good time,’ and you actually deliver.”
As a professor, Clara knows how tough it is to get a group of people to pay attention, much less get them to laugh and enjoy themselves. She said she gained a newfound respect for comedy. “I was overwhelmed,” she says. “I was actually crying. Phil and I were talking, like, where did he get this?”
Tawanda says he felt vindicated by their response, as if there were a new understanding between him and them about his dedication and his ability. Stand-up comedy is his life, until he either makes it or can’t go on. But he knows he’s getting better, and the show his parents saw is proof.
“You don’t want your kid to struggle,” says Tawanda. “Your kid wants to be in the entertainment industry, and you just hear stories about it, and how people fail and end up penniless. It’s scary. I think when they saw me do that, they were like, ‘He can do this.’”
This article was originally published by The Boston Globe