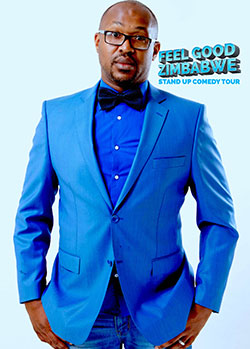 ZIMBABWEAN stand-up comedian Carl Joshua Ncube is set to share the stage with internationally acclaimed and award winning South African comedian, Trevor Noah.
Trevor Noah, took over from John Stewart as the new host of the popular American late-night and news satire television program.
The trailblazing Zimbabwean comedian will also rub shoulders with some of Africa’s leading comedians, including Noah at the Comedy Central International Comedy Festival to be held in Johannesburg at Silverstar Casino from the 25th of November to the 5th of December.
The show is a major milestone for the multi-talented Ncube, who is on a quest to take his act all over the world.
Some of the comedians who will grace the event are David Kau, Ndumiso Lindi, Salvado and international comedians such as Jeff Ross, Hanibal Buress, Ariel Spears and Noah.
Over 60 comedians will take to the stage at the festival.
In an interview with NewZimbabwe.com, Ncube said he was ecstatic to be featured in such a high profile event.
“This is something awesome for a comic to be on comedy central. The number of shows at this festival are incredible I hope I get to watch everyone.
“What is great is that Comedy Central considers us the best of Africa,” said Ncube.
Ncube said Trevor Noah has become a standard for most African comedians.
“Every African comic I know has benchmarked themselves on Trevor. We are happy about the strides he has made and the doors he has opened for African Comedy,” he said.
After the South African, Ncube is heading to his home town Bulawayo for a show at the Nesbitt Castle on December 29 and shuts down what has been an incredible year for him with the last laugh at the Soprano, in Avondale, Harare on December 31. Advertisement