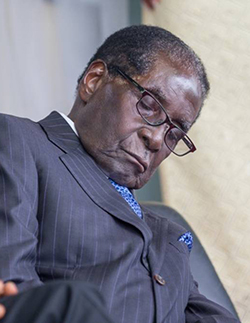 HARARE: Zimbabwe’s economy is falling apart, and police are cracking down on growing anti-government protests. But the country’s comedy scene is booming. No subject seems taboo.
Even 92-year-old President Robert Mugabe, widely accused of muzzling free speech, is a target.
Insulting the president can bring a one-year jail term in this southern African country. Nonetheless, the comedians carry on, becoming bolder as fears of speaking out begin to erode.
In one skit at a show on Thursday called State of the Nation, an actor playing the first lady, 51-year-old Grace Mugabe, lays her stake to the presidency on hearing the news of the “death” of her husband, the world’s oldest head of state.
“I deserve it. Were any of you cleaning his nappy and wiping the spit off his chin?” she says. She also talks up her own chances of winning elections.
“We have always won, even when I was pushing the old man in a wheelbarrow,” she says, a reference to the real first lady’s comment at a political rally last year: “I will push President Mugabe in the wheelbarrow to bring him to work.”
Near the end, a fake Mugabe emerges, struggling to walk while scoffing at rumors of his demise. Some in the audience laugh. Others gasp. The real president has joked at the persistent rumors, telling reporters earlier this month: “It is true that I was dead. And I resurrected. As I always do.”
The comedy show played to a packed audience in the capital, Harare. State of the Nation will be a fortnightly show streaming live on internet, said organizer Davis Guzha, director of Rooftop Promotions.
“Comedy allows us to laugh but also to think about our problems at the same time,” said Sam Monro, or Comrade Fatso, a stand-up comedian who runs Zambezi News, a satirical social media show on current affairs.Advertisement

In everyday life, the state of this once-prosperous country’s economy and politics is hardly a laughing matter. Government has failed to pay its close to 300,000 workers, including the military, on time since June.
Industries are closing down, worsening unemployment where more than two-thirds of the population of 13 million survive on informal work, according to the African Development Bank. People line up for hours at banks to access their money as currency woes deepen.
The speculation over the health of Mugabe, this country’s only leader since independence from white minority rule in 1980, has only heightened the uncertainty.
Near daily anti-government protests are often met with brute force by police.
Yet amid their troubles, Zimbabweans are still laughing at life and at themselves.
While comedy shows attract an upper-class crowd, ordinary people flood social media with jokes, images and video selfies poking fun at the growing problems.
“It has allowed Zimbabweans to deal with a lot of taboo issues,” Comrade Fatso told The Associated Press at his offices at Moto Republic, a structure of former shipping containers that houses dozens of artists.
But the politically charged material comes with risk.
A local actor, Silvanos Mudzvova, was arrested in April for trying to stage a play scripted on Mugabe’s statement that at least $15 billion had been looted from a diamond-rich region by joint-venture companies mining there.
On Thursday, Mudzvova spoke to the AP from a hospital bed in Harare.
“I was tortured,” he said. “Six men took me from my home on Tuesday night. They threatened to shoot my family before taking me away.” The actor, who is also an activist, said he was given electric shocks by men who demanded information on his activities.
Others have been brought to court on insult charges for making and circulating jokes about the president.
Still, comedy shows have become a staple in the capital. The Shoko Festival for comedy and music is set for later this month.
“We are using comedy as a tool not just to inform but as information for action, using comedy to encourage young people to be active and to be part of movements that are changing our country for the better,” Comrade Fatso said.
One of the growing number of young stand-up comedians is Nqobizitha Dube, or Q Boss, who last month took aim at Vice President Phelekezela Mphoko’s 19-month-stay in a $400-a-night hotel suite amid Zimbabwe’s widespread poverty.
“Everybody please clap your hands . We want to thank the VP for allowing us to use his living room for the night,” the comic said, to raptures of laughter, while opening his act in one of the hotel’s auditoriums.