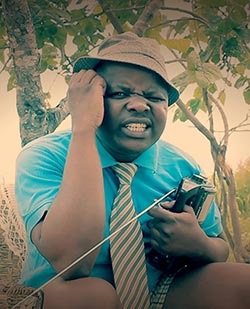 NOX Guni has dropped his first romance and comic video for the track ‘Zvandadiwa’. The release follows the official launch of the single which has been well received on Zimbabwean radio stations.
At a time when many artists sing about each other, Nox said: “I live love and love makes the world a lively, lovely and dramatic place to be in, so I will not stop sharing, through song, what love brings to people.”
Set in Domboshava, Zvandadiwa ticks all the boxes of a creative comic video by portraying, through a dramatic window, the unique experience of a young man who has just found love.
The Rhumba infusion to the track adds to the artist’s mutating creativity and the bass guitar rolls up the package in a promising contender for 2014 after his hit single Ndinonyara
He explained: “I have shifted my musical playfield to some up tempo, rhumba infused dance style that is set to drive music lovers into romantic frenzy. Love comes with fun.”
The song was written and composed by Nox, produced by Daddy Ish, mixed and mastered by gTbeats and Nox at Ice n Roses. It is the first single from the forthcoming Album titled ‘Africa’s best’.
Nox Guni – Zvandadiwa