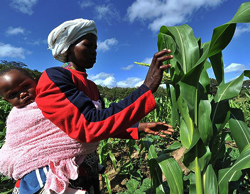 GOVERNMENT’s $500 million command agricultural programme under which it aims to produce two million tonnes of maize from 400 000 hectares of land is an indication that the state has learnt a lot through the successive droughts that have been occurring in the country. Such a move would be good for the country as the availability of food would be a necessity for the livelihood of all Zimbabweans.
It should be recalled that, since independence, Zimbabwe has been having disturbing droughts stretching back as far back as 1982 where some parts of the Southern districts of the country went for months without adequate food with households surviving on one meal per day. Some children had to drop from schools as a result of that drought. In 1992, the country again faced one of its worst droughts in history where some livestock were not spared.
As if the 1992 drought was not enough, in 2000, a Cyclone swept across the country causing another drought leaving some Zimbabweans hopeless and looking to the government for relief assistance. Government had to come up with some Food for Work programs as a means to make sure that food reached the intended beneficiaries. Such an initiative made it necessary for people to get what they had worked for and the program was a success in most districts around the country.
For that reason the government has seen it fit now to come up with the command agriculture programme which stands to lessen the burden of importing maize from other countries. The fact that the government has put in place about five hundred million dollars targeting to produce two million tonnes of maize from four hundred thousand hectares of land shows that it means business. Command agriculture will see the emergence of green belts as new irrigations schemes will be created while those that have been lying idle will be revived.
Actually the world has been watching wondering why Zimbabwe in the first place embarked on the land reform program when the government had no plans to utilise the land taken from the white commercial farmers. So, command agriculture stands to show the doubting Thomases that Zimbabwe is winning the war against hunger and drought. Availing funds to both communal and commercial farmers for the production of maize will make the land reform program a success. Those who have been denouncing the land reform program will be ashamed while other African countries may emulate Zimbabwe and adopt command agriculture. They (Africa countries) may even be persuaded to take the same route that Zimbabwe has pursued since 2000.Advertisement

When the government embarked on the compulsory acquisition of land during the turn of the century, most western countries denounced the move and slapped Zimbabwe with the economic sanctions. The western countries opposed the land reform as those who had large tracts of land taken away from them were the white commercial farmers of European origins. Some black indigenous people were not given opportunities to own land by their colonial masters; only whites could own prime land with very few blacks owning some pieces of land.
So, the move taken by government to come up with this command agriculture should be able to sustain the country. This program, if well implemented, could see the country regaining its bread basket status in the region. While most of the local communal farmers have been relying on rainfall, this program will mean that a lot of farmers will be comfortable working in their land using irrigation means. In most of the southern districts of the country, especially Chiredzi and Mwenezi, there are some good fertile soils which can sustain the country if irrigation programs are introduced there.
Basically, the whole of Masvingo province and some parts of Manicaland province would do well with irrigation programs if funds for such programs are made available. So the government needs to make sure that command agriculture is a success by reviving all irrigation schemes which have been left idle because of the shortage of capital investments. In Chiredzi, which is known for perennial drought, there are two big irrigation schemes which, if revived, could see the country benefiting a lot in terms of food production. The Chilonga and Malipati Irrigation schemes used to sustain the district and even beyond during their prime time.
So with the government coming up with this command agriculture there is hope that such irrigation schemes will be revived so that Zimbabwe is able to sustain its food stocks without importing from other countries. Zimbabwe is blessed with various large rivers and dams. So what is needed is to harvest that water for irrigation purposes so that the government is served from continuously importing maize from other countries.
Zimbabweans should now support the government in its efforts to ensure the country’s self-sustainability through this command agriculture initiative. With the availability of funds and land there is nothing which can stop Zimbabwe from reclaiming its bread basket status.