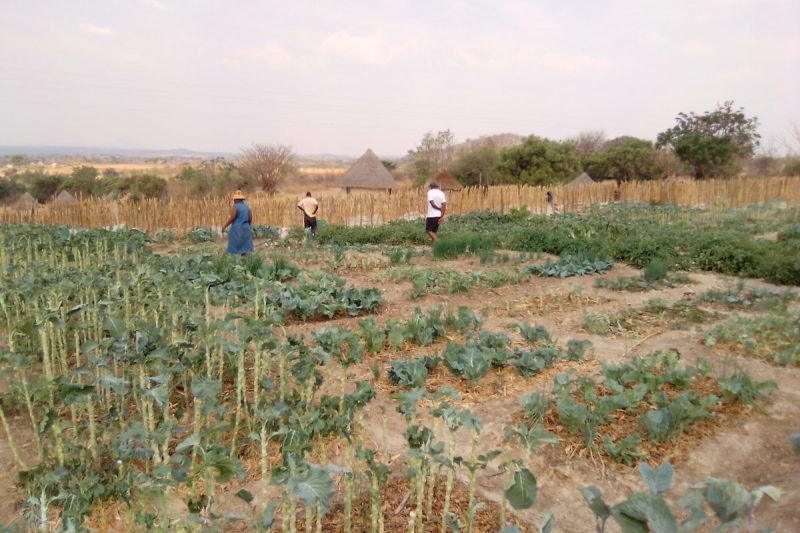 GURUVE: To get to Nyamukondiwa village in Guruve district in rural Zimbabwe, you have to navigate through 170 kilometers, or 106 miles, of mountainous terrain from the capital, Harare.

Along the road, people carry bundles of native timber for commercial use. To fire a kiln to produce 20,000 bricks takes about three cartloads of zebrawood and mopane wood. A stack of 1,000 bricks retails for $35, a needed source of income for villagers.

To power Zimbabwe’s lead as the largest producer of tobacco in Africa (and No. 6 worldwide), it takes 15 carts full of firewood per hectare (or six carts per acre) to cure tobacco leaves. Zimbabwe harvested and sold an estimated 200,000 metric tons of tobacco this year, up 11% from last year, according to latest data from the Tobacco Industry and Marketing Board.

Now, with woodlots in Guruve vanishing rapidly, farmers are traveling deeper into the mountains to find more trees, and households that rely on firewood for cooking are running out of the resource.

However, away from the environmental ruin, the birth of the Kufunga Ndomunhu Project is bringing hope to the village through a women-led reforestation and community garden project that benefits 21 families from three different villages. The project addresses deforestation loss from the tobacco industry and feeds around 600 villagers, including school-age children, to reduce dropout rates due to hunger.

“We started a garden community of young and elderly women with the assistance of resources and ideas by Perseverance Ganga, a son from the village, now based in Harare,” said Isiah Makoshori, the Guruve village head. “We get water from his solar-powered borehole to sustain our garden.”

As the project grows, more new members are expected to join.

When it rains in December, the dry riverbeds start filling up and tobacco farming gets into full swing. After seedbeds and transplantation into fields are completed in late November, the labor-intensive harvesting commences.

A sizeable number of villagers, including women, grow the cash crop, a major foreign currency earner for Zimbabwe. Tobacco contributed 10% of the country’s GDP in 2008. By 2025, the government anticipates turning the tobacco industry into a $5 billion industry.

However, the production of tobacco is eating away at the environment, and native trees in particular. These trees are favored for their ability to burn longer than exotic species, such as gum trees (Eucalyptus robusta). Some 30 out of the 600 residents of the village of Nyamukondiwa are tobacco farmers, each cultivating about 2 hectares (5 acres) per season.

Despite the tangible returns of tobacco farming to the economy, the effects of deforestation in Guruve are glaring. Local plantations don’t grow enough gum trees to supply the need for firewood to cure the tobacco leaves.

This has had an impact in Guruve, which only had 4.7% tree cover in 2000 and lost 8.1% in 20 years despite multiple reforestation initiatives.

To replenish the native woodlots, the Kufunga Ndomunhu Project created a native tree nursery along with a community garden.

The reforestation project aims to teach the community conservation methods, implement an agroforestry system, and provide families with another source of income outside the tobacco industry. In years to come, the community anticipates cultivating herbal medicine, food and firewood from the woodlots.

Fed by a regular supply of water from the borehole, the villagers collect mahogany, mopane and zebrawood tree seeds from the forest, including the soil where the trees originally grow, to create their own woodlot.

Native trees are favored over exotic species because they’re more resistant to pests and diseases, adapt easily to the local climate, and require minimum caring and watering.

“We are focusing on training women on planting trees found in the area to create a sustainable agroforestry system,” said Perseverance Ganga, the borehole owner.

After one year in operation, the plantation has 200 budding trees, and members of the community anticipate planting 2,000 more by the end of this year. So far, the community is benefiting from the help provided by both private and state agricultural and environmental experts, including Ganga’s philanthropy.

“Then, they must prevent ongoing veld fires from destroying both old and young trees.”

According to Greatman Gunha, an environmental scientist at Midlands State University of Zimbabwe, the garden project brings hope to Guruve’s forests. However, he said there’s also more that needs to be done as tobacco production continues to grow in the country.

“There is also a need to substitute sources of fuel to cure tobacco in order to preserve woodlots,” he said.

The garden, with water from the solar-powered borehole, now provides vegetables to 21 families. Inside the fenced garden, members engage in multicropping, including the cultivation of okra, a delicacy for many, that can withstand dry spells.

Tomatoes, watermelons and herbs are also grown, accessing the same perennial source of water. Some of the vegetables are sun-dried so that they can be eaten later when vegetables are in short supply.

Members use hoes, pitchforks, shovels and picks to prepare allocated plots, adding animal manure. To preserve moisture in this hot weather, the women use grass for mulching. Crop rotation is strongly encouraged to control diseases and pests, including the growing of drought-resistant varieties.

A sustainable source of income

Before the project began, most of the women relied on their husbands for much of their daily tasks. Although women were previously involved in farming, the management of resources, including land and the money from crop sales, fell to their husbands. An aim of the project was to help women achieve financial independence and receive their own income that could help the family pay for school fees and food and contribute to savings.

“Each member is allocated specific plots of land to plant vegetables to sell at the market and feed their families,” said Dolis Makoshori, the village head’s wife, who leads the garden project.

The provision of other sources of income for the community that are environmentally sustainable aims to reduce deforestation, Mupara said. She said capacity building for other forms of revenue and education are key to changing attitudes toward the environment and in turn encouraging communities to act to protect forests.

In the year that they’ve been working on the project, the members have collectively saved $700 by selling vegetables, and plan to reinvest the money in farming. Presently, 7,9 million Zimbabweans are considered “extremely” poor, living on less than $30 per month. However, with this project, villagers say they can escape such poverty.

For years, before the establishment of the community project, Stella Marumahoko relied on her elder children working in the city to keep her financially afloat.

Each year, when the harvest failed, she faced the dilemma of how she would feed her family. That has since changed.

“After selling our products, we pool the money into a savings venture. We then used money from our savings to pay school fees, agricultural inputs and started a chicken rearing project. I can now buy monthly provisions,” Marumahoko said.

The garden members also promote a weekly school feeding program by contributing $1 to $5 per month and supplying vegetables.

Poverty and hunger in Zimbabwe have led to children dropping out of school to help the family earn money. In a notable case in 2017, 6 000 students dropped out of school due to hunger and increasing droughts in a rural province.

School dropout rates are high in most drought-prone rural areas of the country.

With success recorded elsewhere, village head Makoshori said he’s optimistic about the Guruve project as other tree nurseries spring up in other rural areas of the country.

“Our small steps hope to leave a generational legacy, in years to come,” he said.