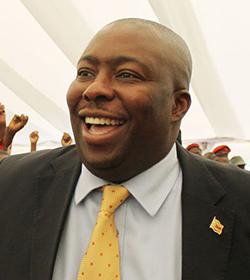 IT never ceases to amaze me how institutions with highly qualified and skilled cadres (Doctors, Professors, Engineers, Prophets, witchdoctors and journalists all lumped together) can be so slow to discern a fact which otherwise an airtime vendor in Kotwa or a Krango and Mbanje vendor along MuKuvisi river can easily discern. Was it the dawn of a new era or what?
On the 19th of November 2016 at the City Sports Centre, His Excellency who also happens to be the Chancellor of all universities in the country met with ex-combatants, war collaborators, restrictees, ex-detainees and such similar groups. A report on “Threats to the party and the Revolution” was presented by former Harare ZANU PF chairperson Comrade Goodwills Masimirembwa.
“Your Excellency, external threats such as western countries and the opposition have now gone on holiday and it is now the internal fights that are set to destroy the ZANU PF from within. It is these internal elements that say vaMugabe chete chete but they are working by night against you. Mr President, they have become the complainants, prosecutors, judges and prison guards, and they have thrown away the keys!” lamented Cde Goodwills Masimirembwa. Well said, Cde Masimirembwa, despite the regrettable delay to notice this.
I believe this has been a phenomenon dating back to the eighties. ZANU PF has never had external enemies. Enemies of ZANU PF have been cadres from within. Cadres who felt they had to take shortcuts to amass wealth to compensate for lost time and the long stay in the bush and atoning for the mosquito bites they suffered during the liberation struggle. Some who, prior to 1980, were active members of the Smith intelligentsia quickly changed sides in 1980 and joined the people`s party. Now in order to mask their nefarious backgrounds, these are the cadres who would be seen raising their fists higher than anybody else and shouting “Pamberi!” louder than anyone else.
Another group would try to out-laugh everyone else at rallies at a silly joke by Makuluone just to draw his attention! They wormed their way to the inner heart of the Dear Leader. But, they had an agenda and they were very patient and would continue so for a very long time. They quickly mastered all the party sloganeerings and sayings, “Asingazive? … Ngaadzidziswe” “1980?… Gore remasimba evanhu … Gore remasimba evanhu? 1980!” As I said before, they had an agenda. The real freedom fighters looked from left to right, up and down. They were getting confused.Advertisement

Post-independent Zimbabwe needed reconstruction. That required skilled people to do so. The real war veterans, I mean the ones who bombed Total Service Station in Harare, the ones who downed helicopters in Chikwaka and Musana areas, the ones who caused havoc in the Mushumbi-Mahuwe areas, the ones who caused sleepless nights to the enemies in Umguza district; I mean Comrades Gabarinocheka, Mabhunumuchapera, Tambaoga, Tsholotsho, these ones were only skilled in the art of the battlefields. But the war was over.
The other set of Comrades had gone to England, Yugoslavia, Libya, Russia, Poland and China to further their studies in the mid-70s. Most of them came back in 1980 and took control of vital state institutions. They never went to the war front. The Tambaoga and Gabarinocheka groups were incorporated in the army which was being restructured into the Zimbabwe National Army. The elite group which had trained outside Zimbabwe and Mozambique (in non-conflict countries) tasted power. Power is sweet. In fact, it is very sweet!
Again, let me say in life when one need is satisfied, another one, higher than the previous need, crops up and again it has to be satisfied. Ambition. Greedy. Cruelty. All this in an environment of limited resources. Could have been better if those limited resources were being managed professionally! It became a “Warumwa warumwa” kind of game! Who has got the most beautiful car? Who has got the most beautiful house? Who drinks in the most expensive hotel? Who has got the most beautiful concubine and is she rented in the most beautiful area in town?
Devil on the Cross! Protrusions started being noticed on the chefs’ bellies. The lower group which had been relegated to lower ranks in the army, police, Prison services started wearing torn shoes to work. They started carrying “half bread nenyimo” wrapped in OK and Jarzin plastic bags to their workplaces. Some toes started creeping out of their torn shoes escaping the heat! New slogans now emerged, “Tighten your belts Comrades. Everything is about sacrifice”.
But the elites were not tightening anything. In actual fact they were broadening their spheres of influence! They started filling vital posts with their relatives. Some of these relatives were not only unqualified but very indolent as well. The country continued to bleed! Some ex-fighters took to composing songs to eke out a living. Notable were the likes of Solomon Skuza. “How can one man buy a car and sell it again?… Leaking… leaking … leaking. Information has been leaking” “Corruption, corruption, corruption in the society!” bellowed Thomas Mapfumo.