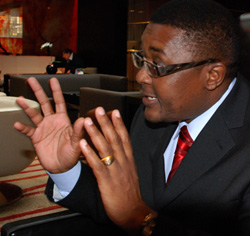 AFRICA tourism experts have described as “completely inappropriate” a plan to build a Disneyland theme park on the Zimbabwean side of the Victoria Falls resort.
The plan was announced by tourism minister, Walter Mzembi, on the side-lines of the UN World Tourism Organisation (UNWTO) general assembly, which Zimbabwe is co-hosting at the resort town with neighbouring Zambia.
Mzembi told New Ziana that the government was planning to spend $300m on the theme park, a venture which he described as a “Disneyland in Africa”.
But the scheme was met with sceptism by Africa tourism specialists.
“Zimbabwe is a country that often struggles to do the basic things it needs to do and this cannot be a sensible suggestion,” said Chris McIntyre, managing director of Expert Africa, a UK-based specialist tour operator.
“People go to Zimbabwe because it actually offers something that is authentically African: they are not going to want to go there for a Mickey Mouse experience. It would be completely inappropriate.”
His views were shared by Lisa Grainger, an Africa specialist and a regular contributor to Telegraph Travel, who earlier this year wrote about the very special allure of the Victoria Falls.
“It sounds like a crazy idea to put a money-making theme park beside one of the Seven Natural Wonders of the World,” she said.
“It would be like building a casino beside the pyramids. The reason people visit the falls is because it’s unspoilt and natural: it’s a glorious part of the Earth. Not because they want to buy candy-floss and be immersed in an American-style theme park.”
Mzembi suggested that in addition to the theme park the project would entail shopping malls, banks and exhibition and entertainment facilities such as casinos.
“We have reserved 1,200 hectares of land near Victoria Falls international airport for hotels and convention centres,” he said.
“We want to create a free zone with a banking centre where even people who do not necessarily live in Zimbabwe can open bank accounts.”
In addition to the United States, countries which have also opened Disney theme parks include France, Japan and China.
Tourism used to be one of Zimbabwe’s main revenue earners and officials in the country hope that it will be again.
However its attempts to assure people that the country is now safe and desirable to visit have been hampered by continuing controversy over the human rights record of President Robert Mugabe, whose re-election last month is disputed by his rivals.Advertisement

The decision to allow Zimbabwe to co-host the UNWTO conference was condemned by UN Watch, an independent human rights group.
Hillel Neuer, head of the Geneva-based group, said: “Amid reports of election rigging and continuing human rights abuses, Zimbabwe is the last country that should be legitimised by a UN summit of any kind.”
President Robert Mugabe’s status as UN “leader for tourism” has also been widely condemned.