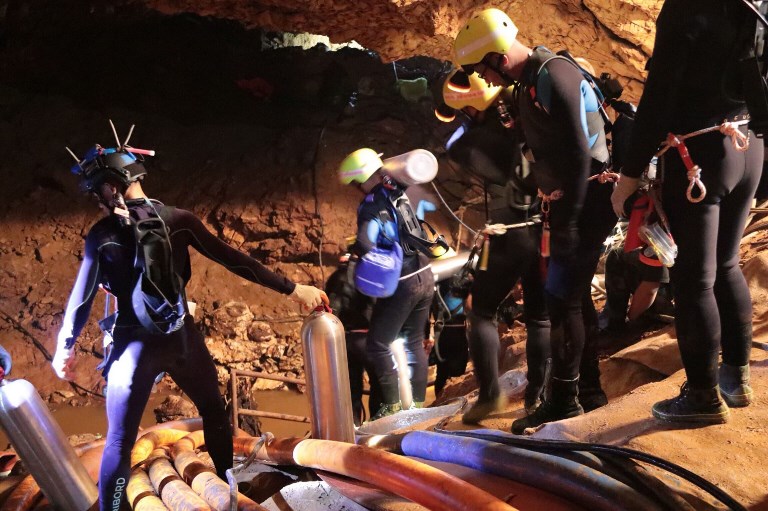 Conditions are “perfect” to evacuate a young football team from a flooded Thai cave in the coming days, the rescue mission chief said Saturday, although a brief downpour late in the evening underscored the huge threat posed by further monsoon rains.

The plight of 12 Thai boys and their coach from the “Wild Boar” football team has transfixed Thailand since they became trapped in a cramped chamber several kilometres inside the Tham Luang cave complex on June 23.

Rescuers have conceded that evacuating the boys is a race against time with monsoon rains expected to undo days of round-the-clock drainage of the deluged cave.

More than 100 exploratory holes have been bored — some shallow, but the longest 400 metres deep — into the mountainside in an attempt to open a second evacuation route and avoid forcing the boys into a dangerous dive through submerged tunnels.

“Now and in the next three or four days, the conditions are perfect (for evacuation) in terms of the water, the weather and the boys’ health,” Narongsak Osottanakorn the chief of the rescue operation told reporters.

The plight of 12 Thai boys and their coach from the “Wild Boar” football team has transfixed Thailand since they became trapped in a cramped chamber of the Tham Luang cave complex on June 23
“We have to make a clear decision on what we can do.”

Later on Saturday evening torrential rain pounded the area for around half an hour, highlighting the urgency of the rescue. It was not immediately clear what effect, if any, the storm would have on the operation.

Rescuers have fed a kilometres-long air pipe into the cave to restore oxygen levels in the chamber where the team are sheltering, accompanied by medics and expert divers.

“When we’re in a confined space if the oxygen drops to 12 percent the human body starts to slow down and people can fall unconscious,” Narongsak said.

Sustained heavy rains could make the water rise to the shelf where the children are sitting, reducing the area to “less than 10 square meters,” he added, citing estimates from cave divers and experts.

In the early hours of Saturday morning he said the boys were not yet ready to dive-out of the cave, a complex and dangerous task through twisting and jagged submerged passageways.

But his comments 12 hours later suggest the thinking has changed, with water levels inside the cave currently managed to their lowest point by constant drainage.

Earlier on Saturday Thai Navy SEALS published touching notes scrawled by the trapped footballers to their families, who are waiting for them agonisingly close-by outside the cave entrance.

The children urged relatives “not to worry” and asked for their favourite food once they are safely evacuated.

In one Pheerapat, nicknamed “Night”, whose 16th birthday the group were celebrating in the cave when they became stuck on June 23, said:

“I love you, Dad, Mum and my sister. You don’t need to be worried about me.”

Thai Navy SEALS published touching notes scrawled by the trapped footballers to their families, who are waiting for them agonisingly close-by outside the cave entrance
Meanwhile the 25-year-old coach Ekkapol Chantawong, the only adult to accompany the boys into the cave, sent his “apologies” to their parents.

“To all the parents, all the kids are still fine. I promise to take the very best care of the kids,” he said in a note given to divers on Friday.

“Thank you for all the moral support and I apologise to the parents.”

The boys are being trained in the basics of diving in case the floodwaters force authorities into a sudden evacuation.

The risks were underlined by the death on Friday of a former Thai Navy SEAL diver, who ran out of oxygen while returning from the chamber where the boys are trapped.

Saman Kunan had been trying to establish the air line when he passed out and perished.

“We lost one man, but we still have faith to carry out our work,” Navy Seal commander Apakorn Yookongkaew said, adding that rescuers have “a limited time” to extract the boys.

Ekkapol’s message is the first from the coach, whose role in the team’s predicament has split Thai social media.

Many have lauded him after reports he gave his share of food to the kids before they were located and helped them get through nine days in the darkness.

Others have criticised him for agreeing to take the young boys into the cave during the monsoon season.

The group became trapped deep inside the cave after flood waters gushed in.