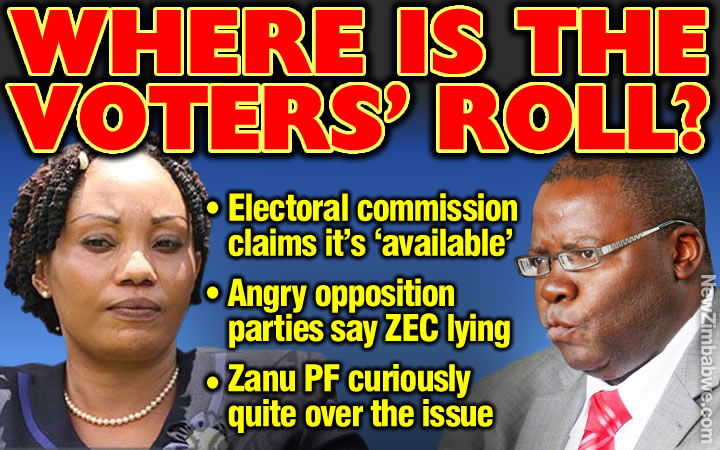 CONFUSION reigns supreme over the release of the voters’ roll with contesting political parties denying claims by the Zimbabwe Electoral Commission’s (ZEC) the document has been availed to them.

The country’s opposition is wary that it may be headed for the same trap that saw it contest the 2013 election without having caught sight of the voters’ list.

ZEC has gone on to convene nomination courts for contesting candidates who are still in the dark on who exactly constitutes the more than 5,6 million registered voters.

MDC Alliance co-principal Tendai Biti told NewZimbabwe.com Friday they have not received a copy of the voters roll as he went on to accuse ZEC of being part of an elaborate plot by the Zanu PF led regime to rig the poll.

“I was reading the (ZEC) chairperson’s statement on the voters’ roll saying ‘we have made it available’. Where! There is no one with a voters’ roll,” Biti said.

Independent council election candidate for Mount Pleasant, Pastor Evan Mawarire also revealed in a social media video that he had approached ZEC to demand a copy of the document Saturday but was told to return this week.

“I was told it’s not available, it’s not ready, come back next week,” he said.

Gorden Moyo, a candidate under Joice Mujuru’s PRC, also denied they have received copies of the document.

Exiled former Higher and Tertiary Education Minister Jonathan Moyo, who was once close to Zanu PF’s campaign strategies, made sensational claims this past week Zanu PF were plotting to use the roll to rig elections adding that his former colleagues in the ruling party in fact, now have copies of the contentious document.

His claims were dismissed as “mischievous” by ZEC chief elections officer Utloile Silaigwana.

Asked if his party has been handed copies of the voters roll, Zanu PF spokesperson and Information Minister, Simon Khaya Moyo said he was not aware of anything and referred this reporter to party legal affairs secretary, Paul Mangwana who was however not reachable on his mobile.

Despite continued pledges by President Emmerson Mnangagwa to see through free and fair elections in the country, there are strong fears of a repeat of 2013 when the election was allowed to proceed with the opposition in the dark on who constituted the voting public.

The MDC Alliance has petitioned ZEC while NCA presidential candidate Lovemore Madhuku has since sued the controversial poll management authority all in attempts to compel force the release the voters roll.

British ambassador to Zimbabwe Catriona Laing has, similarly expressed her disappointments over the Mnangagwa government’s failure to release copies of the document to opponents.

Zimbabwe’s elections have become a major source of national distress as they often leave a scarred nation following torrents of politically motivated violence and other forms of abuse.