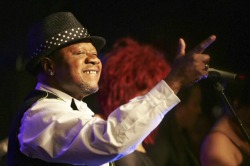 THE influential Congolese music star Papa Wemba has died after collapsing on stage in Abidjan in Ivory Coast, media reports say.
Video from the concert shows the artist, who was 66, slumped on the floor as dancers continue to perform, unaware of what is happening.
French broadcaster France 24 confirmed the death, quoting his manager.
On the African music scene since 1969, Papa Wemba won a world following with his soukous rock music.
The Congolese band leader, whose real name was Jules Shungu Webadio, also inspired a cult movement known as the Sapeurs whose members, young men, spend huge amounts of money on designer clothes.
In 2004, he was convicted of people-smuggling in France and spent three months in prison.
A Belgian court convicted him of the same crime in 2012, handing down a fine of 22,000 euros (£17,143; $24,690) and suspended prison sentence of 15 months.
Hit after hit
The artist fell ill while performing at 05:30 (05:30 GMT) on Sunday, local media report.
He died before he could be brought to hospital, a spokesman for the Ivosep morgue in Abidjan told Reuters news agency.
He remained one of Africa’s most popular musicians. Soukous, also known as rumba rock, became the most popular sound across Africa.
Together with his bands Zaiko Langa Langa, Isifi and Viva La Musica, he racked up hit after hit including L’Esclave and Le Voyageur, and worked with international stars like Peter Gabriel.
He appeared in two feature films, Life Is Beautiful (1987) and Wild Games (1997).
In addition to the prison time he spent in Europe, he was once jailed in Zaire (now the Democratic Republic of Congo), for allegedly having an affair with a general’s daughter.
His conviction in France related to a racket whereby illegal immigrants were taken to Europe posing as members of his band.
Advertisement