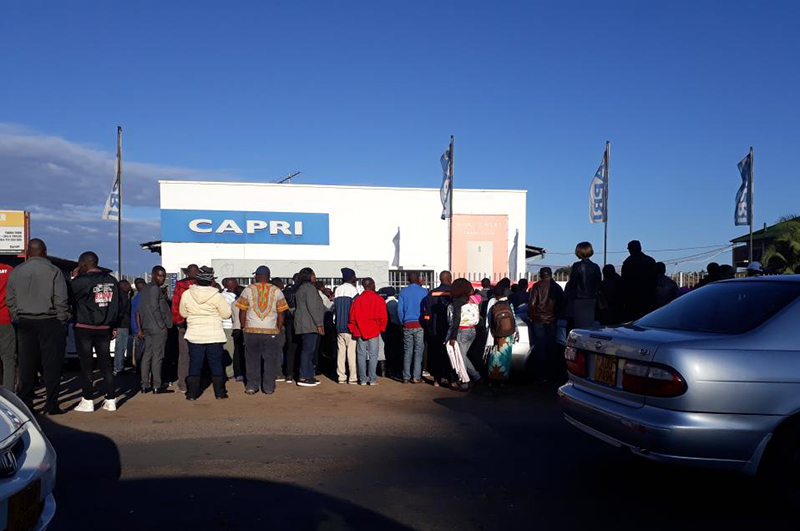 HARARE: Despite the pledge of Emmerson Mnangagwa’s new administration to end cash shortages and right the economy, the desperation shown by companies and consumers in Zimbabwe point to a different reality.

This was illustrated on Monday when nearly a thousand people pushed and shoved, with some getting injured in the process, for the chance to buy heavily discounted appliances at a Zimbabwean manufacturer.

The scene can be regarded as symbolic of the country’s slowing economy, with battling companies and crisis-ravaged consumers at the mercy of price increases, multi-tier pricing and cash shortages.

Zimbabwe’s economy, largely expected to improve after the exit of former leader Robert Mugabe last November, has lurched from one crisis to another, hobbled by little to no real foreign direct investment inflows.

On Monday, nearly 1 000 people gathered at refrigeration manufacturer Capri – listed as a unit of Innscor Africa in the group’s 2017 annual report – to buy heavily marked down refrigerators.

Fridges were marked down by up to 40% and this attracted a large gathering, with people stampeding for the chance to buy the appliances.

“I was told by a nephew who works around this area over the weekend that prices will be reduced by half, starting today, and I made sure I arrived around 05:00. But when I arrived, there were already people lining up.

“It was a bit orderly in the morning but now everyone wants to jump in and we are just hoping we get the fridge we want at the end of the day,” said a woman in her mid-40s as she pushed to gain entry just after the shop opened.

The large crowd at Capri epitomises the desperation of both Zimbabwean companies and individuals. The companies have been suffocated by shortages of forex, which they badly need to import equipment and raw materials.

But there is already speculation that the marked-down refrigerators could be damaged or faulty products. Others have also said through social media that the company reduced prices to clear stockpiled products it had failed to clear from shops.

There’s like a thousand people at Capri Graniteside. Must be a clearance sale going on. Fridges could be $20. lol

There were also concerns that the company could be closing down, hence the marked-down prices.

According to reports from 2016, Capri has been producing about 6 000 fridge units every month against capacity of about 18 000.

However, there have been complaints over the pricing structure of the products from Capri and other companies in Zimbabwe, with some Zimbabweans preferring to import refrigerators from South Africa and Botswana.

There was no immediate comment from Capri officials. Sifelani Jabangwe, the president of the Confederation of Zimbabwe Industries, said on Thursday that business confidence in Zimbabwe is tumbling ahead of elections expected in the next few months.

“Most economies are usually affected and tend to slow down as general elections approach, and (in) Zimbabwe we are not any different.

“Investment also stalls due to uncertainty and the adoption of the ‘wait and see attitude’ by most potential investors, and we have all witnessed this,” said Jabangwe.

Some Zimbabwean companies have also resorted to a multi-tier pricing system, where they charge a certain amount for mobile money and bank transfers or swipes, and another for cash.

Prices are usually lower by up to 30% if one is purchasing with US dollars or rands. On Monday, Capri reduced prices for some products that normally cost $525 to $250.

“It is a survival strategy and to suit the needs of various clients. Those without cash and forex suffer the most, as companies want to cover the premium on local money when they buy foreign currency for importation purposes,” said economist Moses Moyo.

The central bank does not allow multi-tier pricing and retailers risk being punished by the government.

Zimbabwe’s forex shortages frequently result in the country failing to pay for key imports such as petrol and diesel, medicines and other goods.

The worsening economic situation in Zimbabwe has affected consumers the most, who now face the risk of continuously rising prices.

Zimstats confirmed the trend of price increases in Zimbabwe, saying this month that the inflation rate for April had quickened by 0.03 percentage points to 2.71%.

Although government officials claim that digital payment systems have halved the problem, the reality on the ground is that transactions are still a mere wobble although supermarkets and banks have been raking in the profits.

But for most Zimbabweans, it’s still an issue of waiting for the rain, six months after Mugabe was pushed out.

had a tour of the Capri factory in Graniteside..6000 fridges being pumped into the market every month.Capacity 18000 pic.twitter.com/b9hi5JQGX5