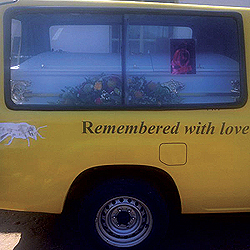 CHIWONISO Maraire was laid to rest in Chimanimani on Monday – but body viewing was closed to mourners.

The mbira star, who died last week at the age of 37, was buried amid claims of a bizarre family dispute.
Her body was kept in the car after her family refused it entry into the Bluffhill house where she lived in Harare on Saturday night, and the drama followed to Chakohwa Village in Chimanimani where again her remains remained in a hearse overnight Sunday.
Before burial on Monday, no body viewing was allowed by the funeral parlour handling her funeral.
Her uncle Tennyson Maraire said: “We were told not to open the casket because the disease that claimed her life is highly contagious.”
Maraire is believed to have succumbed to pneumonia 10 days after being admitted to a hospital in Chitungwiza. Pneumonia is not contagious.
Deputy Prime Minister Arthur Mutambara, who hails from Mutambara Village in Chimanimani, and a host of celebrities attended the burial, among them musicians Charles Charamba and Dudu Manhenga.
Chiwoniso’s two children with her late ex-husband Andy Brown – Chengeto and Chiedza – were joined by their half-sister Ammara, whose mother died a few months before Andy Brown’s death in March last year, in an emotional musical tribute to their mother.
In a graveside eulogy, Mutambara said: “I’m here as son of Chief Mutambara as well as representing the government although it expires today. When someone dies, as much as we mourn, we should learn something from each and every funeral.”
He said Chiwoniso, who was born in the United States, chose to live in Africa and popularised the mbira.

She had left a legacy, he added.
“We must be united as a country and Chiwoniso was a unifier of people through her performances in cultural activities,” Mutambara said.Advertisement