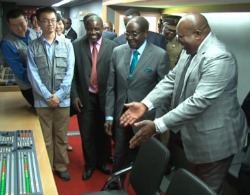 WHEN news of the plight of the long-suffering ZBC staffers was brought to light a few months ago via the print media, to the effect that the workers had gone unpaid for over six months, an executive is reported to have had a ready answer which was an effective middle finger salute at the struggling employees.
When told that there was a hunger strike from workers to express how much they were suffering, the official is on record to have said “I have however, heard that there have been messages being sent on workers’ mobile phones to that effect. If they decide to seek divine intervention, then, let them do so, but at their own peril.”
The response became topical not only for its nonchalance at the plight of the workers, but also for the skill, or lack thereof, with which the speaker poked the eyes of providence without fear, one would say with a bit of insolence even.
God has a sense of humour and while those who went through the hunger strike are seeing more than a glimmer of hope as Minister Jonathan Moyo wades in to salvage the situation at Pockets Hill and the plight of the workers, those at the helm are the ones that are probably going to need the said divine intervention. Yet therein lies the real problem at ZBC. Arrogance!
Indeed the whole timeline that even led to the dissolution of the board and the sending on leave pending a forensic audit outcome of CEO Happison Muchechetere is littered with a show of arrogance, nonchalance and contempt. And this can further be broken down into three groups, the viewers, the political administration on behalf of government as a stakeholder and the workers at ZBC.
The political administration is said to have given the board time to put their house in order –  whole 14 days period to come up with a turnaround strategy that makes sense to be handed over to the Minister. While he sat as the clock ticked on the final day, Moyo could sip on his tea and frequently check his watch, but no document came his way. The people on the Hill could just not be bothered whatsoever!
In fact the story that is the ministry had to follow up and inquire only to be told that after ages of sitting on their laurels the board had not come up with a turnaround document that was acceptable to them all. The workers are said to have repeatedly sought an explanation with regards their salaries, but trust a mafia that does not care about the authority of the minister to give a whole lot less worry about their own workers.Advertisement

And the viewers? Well, who gives a damn about those? If they can ignore workers they are seeing everyday, who cares about the millions of viewers who are in their homes far away from Pocket’s Hill? A Hill onto which you climb and start worrying about your pocket! Who cares about their need for quality programming? For balanced mature programming that is both informative and entertaining?
That Zimbabwe was one of the pioneers of television on the entire continent is something that we should never mention because of our current state of shame. Because far from being the beacon that shows how far television has developed on the continent, we have a situation where the dinosaurs that run the medium have no clue where the world is going, what the new world trend is nor do they have any acumen on how to run a radio and television station profitably so that it makes bigger and better profits than its competitors … wait a minute … it does not have competitors! And that is where ZBC takes the cake. In a race where it is the sole competitor, the public broadcaster comes last.
Some think the action to dismiss was probably too hurried. The truth is that when Jonathan Moyo had taken his hand off the Bible straight after being sworn in by President Mugabe, he might as well have called Pockets Hill from the steps of State House and dismissed the lot on the Hill and nobody would have wept at all. That Moyo’s announcement as minister saw a number of people tie yellow ribbons round the old oak tree is obvious. Only somebody with his grit could have confronted the rot at the national broadcaster and achieved something notable.
There has been silence ever since those at the helm were sent packing. It is without question that strategy and real change and innovation has to follow. Change for change’s sake will not flush out the rot and maggots at the Hill. Not a new idea has passed through the gates to Pockets Hill in a long time. But of course the same cannot be said for new cars. Now those have been rolling in. The time is now for the institution to be remodeled and to show respect for the public by the leadership there and not their nonchalance which they have been all too eager to dish out like confetti to an abused viewership whose needs do not seem to matter to them.
Certainly too the workers now deserve better than to be told to ‘eat cake’ a la Marie Antoinette!  It is hardly the politics behind the demise of ZBC as many would want to say particularly the MDC-T which has always cited “imbalanced” reporting skewered purportedly in favour of Zanu PF. Institutions like Zimpapers have been accused of the same. Yet in the face of stiff competition and being in step with the greater national interest as espoused by the politics of Zanu PF, they have managed to make a profit whilst creating relatively decent products.
Granted, Zimpapers has her warts; it is hardly within the realm of the gods. But it is not in the realm of the demons where ZBC currently resides. The leadership at ZBC lacked business acumen and had a serious allergy to performing anything that remotely resembled work. The end result is they have hit rock bottom and even started to dig. For them the bottom is not bad enough.
ZBC has become so unholy that even demons are fleeing from it. With the right fresh ideas, fresh blood and innovation, a new day can come to ZBC and all and sundry in Zimbabwe can keenly and proudly associate their name with that broadcaster in spite of our differing political persuasions. After all it is a public broadcaster and should bring smiles and nods from across the fabric that constitutes Zimbabwean material.
The prayer now is that the appointer not replace Lucifer with Satan. And for the workers having a last laugh, maybe divine intervention and its pursuit are not such a bad thing after all. And the previously contemptuous leadership? Well, let them eat cake!
Robert Mukondiwa is still some random guy who sits at home all day watching TV waiting for the day when great programming returns. robertmukondiwa@gmail.com